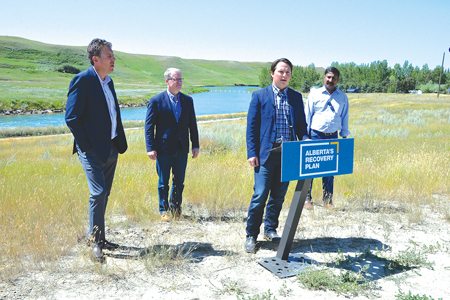 While $815 million will soon be flowing to eight southern Alberta irrigation districts for infrastructure replacement and increasing storage capacity in reservoirs, there wasn’t a whole lot of details in last week’s announcement on exactly which projects will be funded through this partnership between irrigation districts, the province and the federal government.

Part of the reason for the vagueness of the information appears to be the irrigation districts themselves will help set their own priorities, and collectively invested $163 million of the total $815 million announced. Another $245 million will be coming from the Government of Alberta with the remaining $407 million coming from the Canada Infrastructure Bank.

According to a 2019 report from irrigation districts to Minister of Agriculture Devin Dreeshen obtained by Southern Alberta Newspapers, the SMRID is hoping to put $84 million to create new onstream storage capacity at its Chin Reservoir.

Westwood said the investments were a major game changer for his district.

“This is going to be very transformational for the St. Mary River Irrigation District,” he said. “We are looking at 26 modernization projects which look at converting open canal water conveyances into closed pipeline systems, which are much more efficient. This will allow us to basically irrigate more acres with the same amount of water, and see potential growth in irrigated acres within our district.”

Much of the planning for this pipeline work, and the proposal to increase local water storage capacity in the system, have been in the works for over 10 years, Westwood said, but had been awaiting funding.

“What today’s announcement allows us to do is accelerate the timing of those projects significantly,” he confirmed, “and in the case of, potentially, the reservoir project may be allowing something to happen that may never have happened.”

Westwood said no matter which way you slice it, last week’s major announcement was a great day for irrigators, and the economy of all of southern Alberta.

“It’s a fantastic day,” he said, “and we are really happy. We think it is a great announcement for what the future of local irrigation is going to be.”

Taber Irrigation District general manager Chris Gallagher agreed with Westwood, saying the projects under consideration by his board would be of generational significance once completed.

“A number of the irrigation districts are starting to reach their expansion limits,” he explained, “which means the only way we can expand irrigated acres is by saving more water.”

“By using the same volume of water over a larger number of acres. So the timing for this is perfect because we are basically running out of acres, and there is lots of good land out there to be irrigated.”

“It can stimulate the economy and expand value-added processing, and those types of things.”