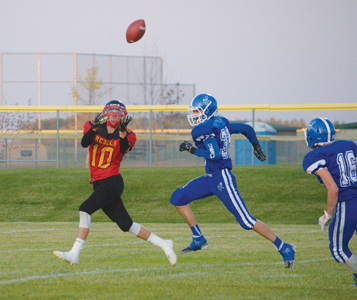 Hoping to build on a great Week 3 victory, the W.R. Myers Rebels were back on their home turf this past weekend as they welcomed in the McCoy Colts.

Coming into the weekend, the Rebels had a 2-1 record and they were hoping to extend that to 3-1 as they took on a familiar foe. Whatever the Rebels did during their week of practices paid off as the team came out and gave another strong performance en route to a 50-0 win.

“McCoy is a young, rebuilding team this year, but they certainly brought the fight to us. More so than what the scoreboard showed, really,” explained Jason Jensen, head coach of the Rebels. “They won the opening kickoff and elected to receive the ball. Our defence came out fired up, and on the first play from scrimmage, Brigham Porter and Allen Clements forced a fumble, which John Van Uden recovered, giving us immediate possession. Two plays later, Brennan Abela found the endzone on a short run, to put us up 7-0 early. Our defence stayed strong after that, limiting the Colts to short drives and two and outs, and stopping their first shot at getting on the board when Tyson Harker blocked a field goal attempt.”

After a great start to the game, the Rebels never let their foot off the gas. In the second quarter, the team continued its strong play and they were able to extend their lead by a few touchdowns before halftime.

“Midway through the second quarter, brought it to 14-0, with a 20-yard TD run. After that McCoy’s offence finally broke out, and drove deep into our end, but our defence dug in and forced a turnover on downs. From there, our offence put together a 13-play drive, ending with an Evan Rabusic 36-yard touchdown run, to bring the score to 21-0,” continued Jensen.

Like in Week 3, the Rebels found themselves with a healthy lead heading into the locker room. Despite being up by three touchdowns, the coaching staff encouraged players to play clean football and limit their mistakes in order to come out of the game with a win.