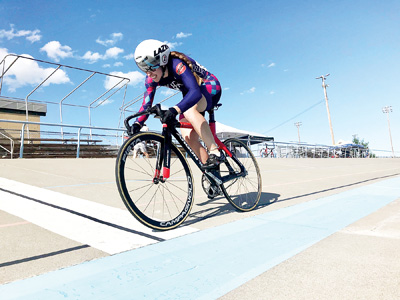 While the pandemic certainly made things difficult for Taber’s Sarah Orban, but with things opening back up, she’s continued forward with great results.

This spring and into summer, Orban has been all over the world competing in events and it’s been a welcome change to get back to competing, says her dad Scott Orban.

“She’s going to be riding in the sprint with two other teammates. It’s a three-person team sprint. Her other teammates are both Olympic medalists, so she is on a very good team,” he said. “So, cycling schedule, I guess they have what’s called Nations Cups. Nations Cups have replaced World Cups — they used to call them World Cup events but they changed the name. So, she’s had a couple of Nations Cup events. I know she won a silver event in team sprint in Scotland. They had one in Scotland and then they had one in Ontario.”

Orban along with her teammates Kelsey Mitchell and Lauriane Genest have been competing together in the sprint event. Orban has the lead in the sprint with Mitchell riding the mid, and Genest anchoring the team.

“And they go to Commonwealth Games now, and from there they fly straight to Peru for a Nation’s Cup there. These Nations Cups are all over the world and hosted by different countries each year. And so she will go to Peru and then from there back to Canada, and she gets a week off, and then they prepare for the World Championships which are October in Paris,” continued Scott. “Most recently she was in Columbia. So she went from Scotland, then Nations Cup in Ontario, and then she went to Columbia. She was in the sprint, I think she came in tenth, and she was not happy with herself. That’s a race she needs to make some waves in. They didn’t have a team sprint at that one so she didn’t go into team sprint.”