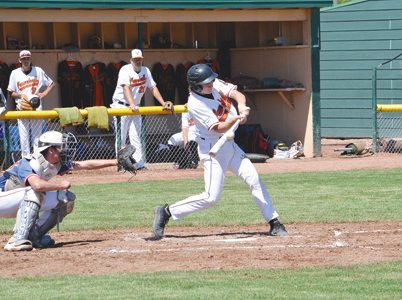 In their return to the U.S. for the District tournament, the Vauxhall Spurs were excited to finally get a chance to compete at the big tournament.

While the team was thrown a few curveballs, including their coaches not in attendance, the team saw plenty of success despite falling in the semi-final. Game 1 saw the Spurs take on the Great Falls Chargers which resulted in a 13-2 win. After a strong opening showing, the team faced off against the tournament hosts in the Havre North Stars and while it was a close game, Vauxhall fell 6-3.

With their season on the line, the team faced off against a familiar foe in the Lethbridge Miners. Scoring came early and often in the game, but the Spurs were able to carve out a 14-9 win against their Alberta rivals. In order to advance to the semi-finals, the Spurs had to overcome the Tri-County Cardinals. In a thrilling battle, the Spurs were able to walk off the Cardinals thanks to a Dallas Cummins base hit. Heading into the semi-final, the Spurs were hopeful to avenge their first loss of the tournament as they hit the field to take on Havre yet again. Despite a strong pitching performance from Cummins, the Spurs’ bats were unable to muster any scoring as their season ended with a 5-0 loss.

With the Vulcanos unable to attend the tournament to coach, Liboiron stepped in to manage the team. Despite their presence not being in Montana, the Vulcanos did provide tons of information and helped set lineups.

“(The players) did really well. It was kind of a tough weekend for them with their coaches not getting across the border and having had another guy step in and coach them, so that’s always difficult. It just shakes things up like that, but they all dug down, and they all give it their all and left everything on the field every night,” added Liboiron. “It’s a little nerve-wracking. You know I had coached them earlier in the season before the boys got back from school. So, there is some familiarity there — a lot of the kids I coached before here. So, it wasn’t like I was a totally new person stepping in there, but it’s tough for them, you know? The other coaches have their ways of doing things and whatnot. I was in constant contact with them and they kind of set up lineups and went over things and they helped out along the way from afar. But we got ‘er done and we got through it, it was good.”