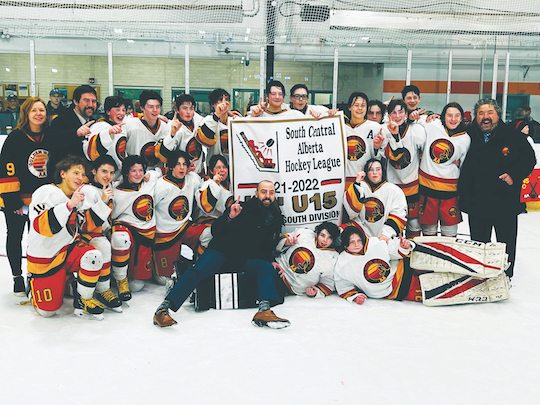 While the U18 Golden Suns saw their regular season end this past weekend, the U15 Suns were fighting for a chance to reach the U15 South Finals as they played in the Conference Playoff Tournament.

South Central Alberta Hockey League’s U15 Conference Playoff Tournament went this past weekend in Medicine Hat with both North and South divsions playing in different brackets. The teams played in a three-game round robin on Thursday and Friday with the top four in the tournament facing off in the semi-finals Saturday and the Championship game going Sunday. The respective Conference Champions will advance to a best of 3 League Championship Playoff March 10-13, with the League Champion advancing to the Alberta U15 AA Provincial Championships.

The U15 Golden Suns were ranked fourth in the conference with Wheatland at one, Medicine Hat SEAC at two, Okotoks at three, Lethbridge at five, and Foothills at six. On the other side, Bow Valley was ranked first, Olds was second, Red Deer was third, Airdrie was fourth, West Central was fifth, and Central Alberta was sixth.

Game 1 for the U15 Suns went on Thursday afternoon as Taber took on the Lethbridge Hurricanes. Lethbridge would score three straight in the first period and despite a comeback effort by the Suns throughout the three periods, they would fall 5-4. Parker Young had a pair of goals, Koye Larson had a goal and an assist, Garrett Janzen had two assists, Take Jensen had a goal, and Nathan Planger had an assist. Bowen Hann got the start in net for Taber and the goalie made 20 saves on 25 shots.

Despite the first game loss, the Suns wouldn’t let that affect them on Friday when they returned to the ice to take on the Okotoks Oilers.