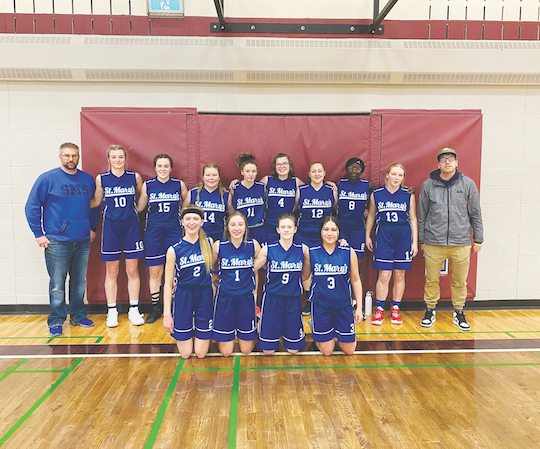 The St. Mary Auroras were in Calgary this past weekend as they hoped to take home the first-place finish in the Sweet 16 Tournament.

“Going into the weekend, the team did not know what to expect but recognized they could be playing against a few provincially ranked opponents in 1A and 2A,” explained coach Jeff Kooiker. “They had a total of four games over the weekend and started Thursday evening with a hard-fought victory over West Island College. A strong defensive effort led to a nine-point lead at halftime. The defensive effort continued throughout the game with the Auroras coming out on top by 30.”

The Auroras got several strong performances from a number of their players.

“Angela Unger led all scorers with 19 points while Jayda Kooiker and Janae Dyck had 15 and 12 rebounds respectively,” added Kooiker.