Oil Kings wrap up 2021 with plenty of games 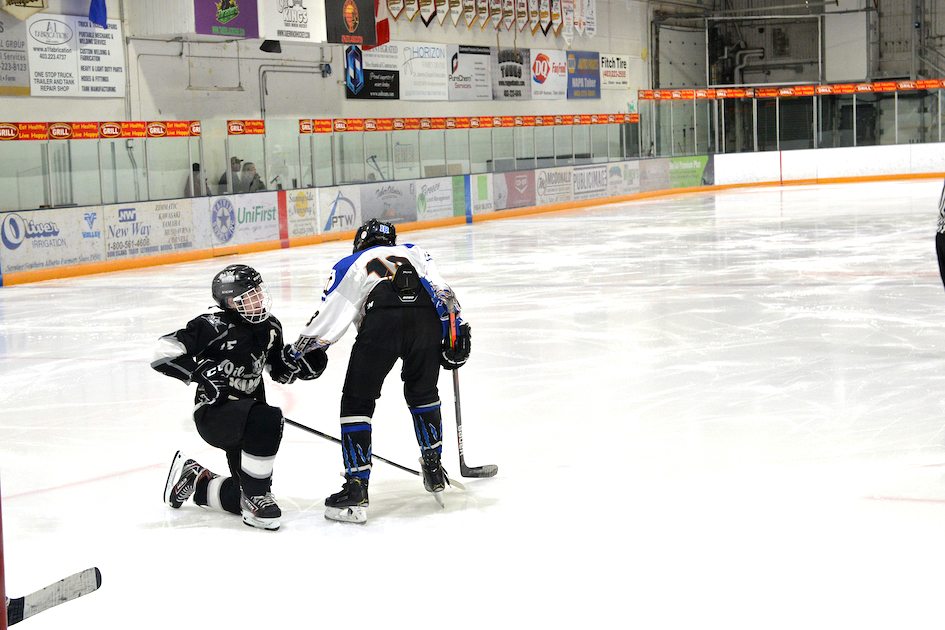 The Taber Oil Kings were all on the ice this past weekend as the Central Alberta Hockey League is now paused for the Christmas break.

On Saturday, the team saw Picture Butte come to town and the Oil Kings were handed a 9-5 loss. Hayden Eldridge and Cole Swanson found the back of the net twice for the Oil Kings while Charley Fletcher had a goal and an assist, and Jack Burt and Wyatt Valgardson had an assist each. Brodyn Sutka made 27 saves in net for Taber.

On Sunday, the team hit the road to Foremost as they took on Bow Island/Foremost. The Oil Kings would eventually fall in a 10-4 loss. Rowan Beckie found the score sheet with three assists, while Ryder Nielsen and Eldridge scored a pair of goals, and Swanson had an assist. Sutka made 32 stops for the Oil Kings.

After the Christmas break finishes, the U11 Tier 3 Oil Kings will return to the ice on Jan. 8 when they welcome in the Coaldale Cobras and then travel to Irvine on Jan. 9.

One lone game in 2021 remained for the U11 Tier 6 Oil Kings as they hit the road for a game in Redcliff on Saturday afternoon.

In a high powered offensive performance, the Oil Kings would skate to a 9-6 victory. Jaxson Tychsen would snipe four goals, Ryden Baker would chip in with a hat trick and an assist, Logan Rabusic collected a goal and an assist, and Blake Untereiner potted a single goal. Aidyn Derksen Arnel made 24 stops between the pipes.

With several weeks off, the U11 Tier 6 Oil Kings hit the ice again on Jan. 15 in Pincher Creek and Jan. 16 at home against Siksika.

The U13 Oil Kings had two final games in 2021 this past weekend.

On Saturday, the team welcomed in Duchess and after a close game, the Oil Kings would fall 8-7. Delphin DeBoer couldn’t be stopped as he put five past the Duchess netminder, while Ethan Volk had a goal and two assists, Lincoln Wiebe had a single goal, and Raiden Koizumi, Jaxson Badura, and Adelyn Williamson chipped in with one assist each. Jack Lukacs made 11 saves for the Oil Kings.

On Sunday, the team hit the road to Lethbridge and collected a 7-4 win. DeBoer continued his hot streak as he scored four goals and collected one assist. Wiebe had two goals, TJ O’Grady had one goal, while Volk, Skylar Jensen, and Aiden Pierzchala each had an assist. Lukacs made the start in net and faced 39 shots.

Coming out of the Christmas break, the U13 Oil Kings will match up against Duchess again at home on Jan. 15.

The U15 Oil Kings were in tough this past weekend as they went 0-2.

On Friday, the team visited Magrath and skated to a 7-2 loss. Ryan Gray and Blake Rabusic scored the lone goals for the Oil Kings. Avery Remfert made 32 saves in the game.

On Saturday, the Oil Kings were blanked 8-0 at home against Redcliff. Ty Dorin made 43 saves on 51 shots in the loss.

After the Christmas break, the U15 Oil Kings return with a home game against Irvine on Jan. 2

Only one game was on tap this past weekend for the U18 Oil Kings.

The team saw Brooks come to town on Saturday which resulted in a 9-4 loss for the Oil Kings. Parker Miller put two goals past the Brooks goalie while Cooper Ross had a goal and an assist, Gideon Tams had a single goal, and Aiden Farewell and Evan Friesen each had an assist. Chase Plumb made 45 saves for the Oil Kings.

In 2022, the team returns to the ice on Jan. 8 when Bow Island/Foremost comes to Taber.