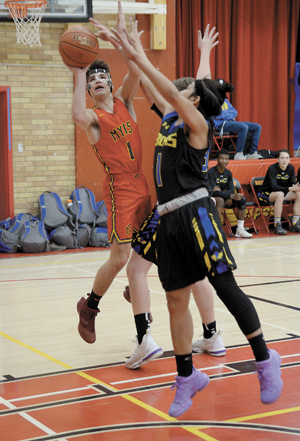 The 2021-22 Deep South Basketball season for Myers boys teams started on Dec. 1 when they welcomed in the SV/JV Immanuel Christian Eagles.

In the junior varsity game, the Rebels saw themselves down 30-24 at the half. Despite being down at the break, the team battled hard in the second half and secured a 53-51 win. Leading scorers for the JV team was Brigham Porter, who had 18 points, and Noah Mouland, who had 13 points.

In the second game of the night, the SV Rebels took to the court. In the first half, the Rebels took a 35-23 lead into the locker room. Rebel scoring increased again in the second half as they collected 45 points and walked away with an 80-38 win. Colby Torrie had 31 points in the game, while Joel Torrie had 18 points and Kade Lund contributed with 15.

On Dec. 6, the JV and SV boys teams welcomed in the Coaldale Christian Titans for another double feature at the Myers gym.

Like the previous week, the Rebels continued to put plenty of points on the scoreboard en route to a pair of wins.

On the JV side, at the half, the Rebels led 33-26. Despite a stronger offensive showing in the second half by the Titans, the Rebels were able to control the game and win 61-51.

Kade Hansen led the Rebels offensively with 18 points while Tyson Harker had 13, and Cody Heide had 11.

The SV team continued their dominance with another blowout victory as they walked out of the gym with a 79-51 win.

Next games for the Myers boys basketball teams comes tonight when the Rebels head to Coaldale to take on the Kate Andrews Pride.