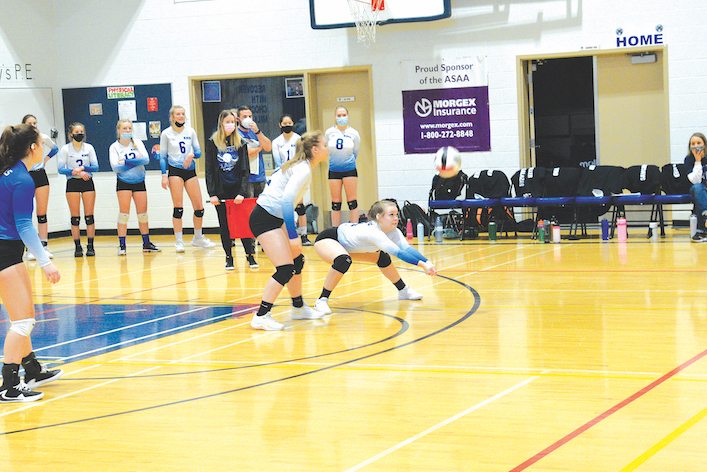 Some of the best volleyball teams in southern Alberta were in Taber last week when St. Mary’s School hosted the 2021 ASAA 2A Girls Volleyball Provincials.

Games were held at the SMS gym and W.R. Myers gym with 10 teams participating in the tournament, including St. Mary’s and Vauxhall High School.

“The South Zone was represented by the 2A South Zone Champions — the Magrath Pandas, second-place Vauxhall Queens, and the host school St. Mary’s Auroras. The Auroras came into the tournament after a disappointing loss against County Central High School the previous weekend, but practiced hard and were ready for pool play on Thursday and Friday,” explained head coach Matt Marchesin.

Marchesin explained “part of our identity this year has been resiliency and playing one point at a time”, and the Auroras were more than ready to battle at the tournament. In a pool with Magrath, Sexsmith Secondary, Notre Dame, and Edmonton Christian, the Auroras knew they had to play their best volleyball in order to place.

The Auroras started their tournament with a close game against Edmonton Christian that saw them lose in three sets 16-25, 25-17, and 10-15.

Their next game was against the top-ranked Magrath Pandas which saw St. Mary’s fall in two straight sets 25-13 and 25-16.

After a tough few games, the Auroras matched up against the Notre Dame Wildcats from Bonnyville with the Aurora’s losing in two tight sets 25-27 and 21-25. Aurora right side player Jayda Kooiker helped the team with eight blocks in the first set.

“It was quite the match and a great way to end the season” explained Kooiker.

The final round robin game on Friday saw the Auroras lose in straight sets to Sexsmith 25-19 and 26-24.

When all was said and done, Magrath came out as the champions, winning their second straight 2A girls provincial title after being Calgary Christian.

The Vauxhall Queens placed in third after beating Notre Dame in the bronze medal match.

As for the Auroras, the team’s players were proud to wear the St. Mary’s jersey one last time in their home gym.

“On behalf of all the seniors, I know that having the opportunity not only to play in provincials, but host it in our Grade 12 year, is so memorable, and something we will remember and look back on as we enter the next part of our lives,” said Preslee Muller, captain of the Auroras.