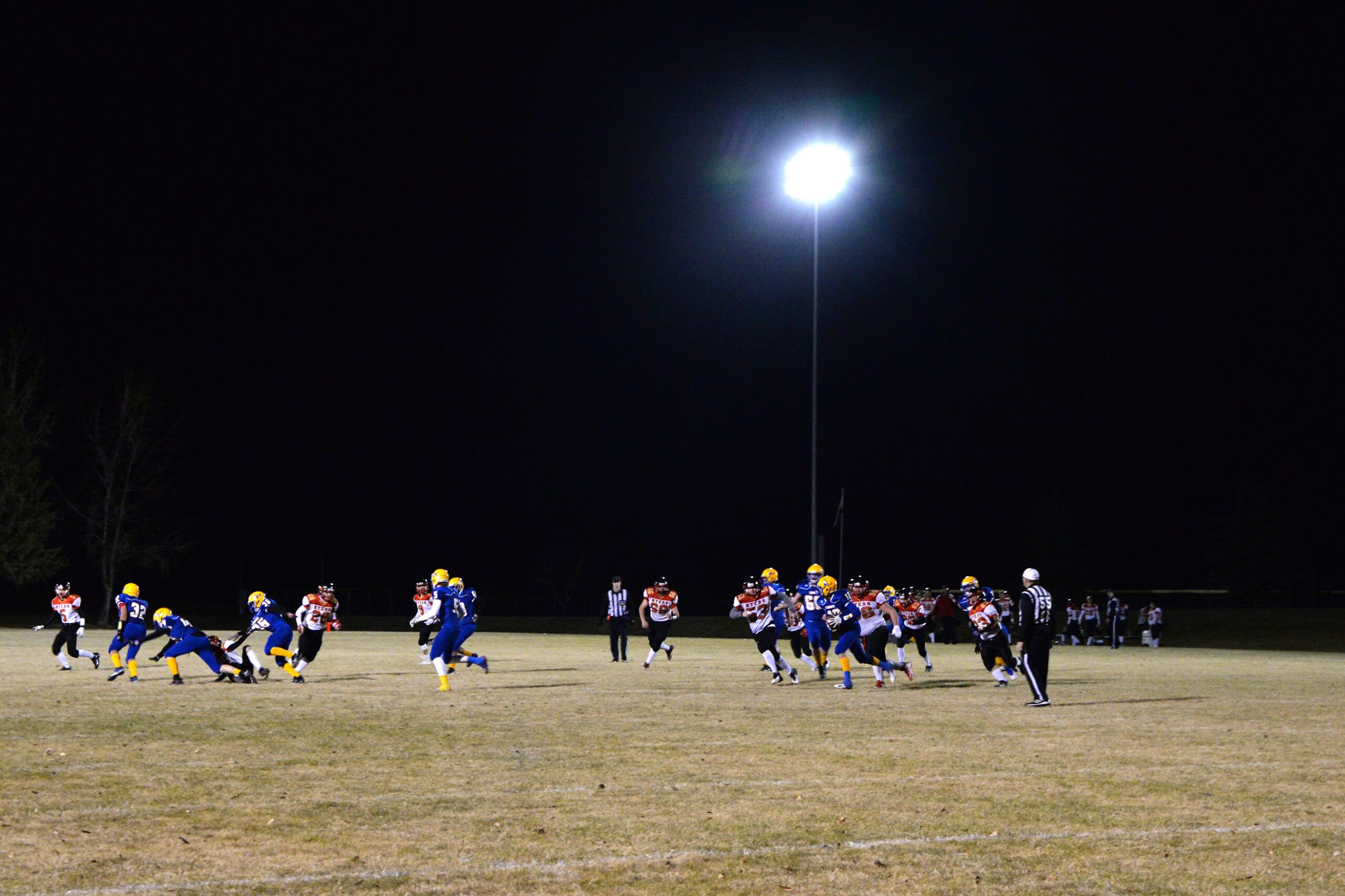 After a convincing 24-6 win against the Willow Creek Cobras to win the ASAA South Zone Tier 4 title, the WR Myers Rebels football team were set to face off against the Canmore Wolverines in the ASAA Tier 4 Provincial Quarterfinal.

On Saturday, the Wolverines headed south to Taber for the game and the Rebels were once again ready for battle. The coaching staff and players were more than ready for any challenge Canmore threw at them and they were able to leave the field with another convincing win, this time 38-7.

“I expected these boys to come out fired up, and they did not disappoint me,” said head coach Jason Jensen.

In the first quarter, the Rebels’ defence made a pair of big stops which led to the offensive unit hitting the field and collecting the first points of the game.

“Canmore received the opening kickoff, but our defence was all over them, forcing them to go two and out. The offence immediately went to work, and after an eight-play drive, quarterback Kade Lund found receiver Mason Werewka with a pass into the endzone to go up 7-0, about six minutes into the game. Another quick two and out, and our offence was right back at it, with Lund spotting receiver Colby Hansen behind the Wolverines’ secondary, and hitting another touchdown bomb, making the score 14-0, near the end of the first quarter. At that point, Canmore seemed to get their feet under them again, and both teams traded short series back and forth.”

After a strong first quarter, the Rebels continued to up their play in the second. Both offence and defence were sharp and WR Myers saw their lead continue to grow.

“Midway into the second quarter, Lund and Werewka connected on another touchdown pass, this time for 73 yards, widening the gap to 21-0. Now, the ensuing kickoff saw some wackiness, as an attempted squib kick bounced off of a Wolverines returner, and basically bounced right back to Werewka, giving the Rebels the ball back with excellent field position. Three plays later, receiver Aiden O’Connor made what can only be described as a circus catch through heavy coverage in the endzone to make it 28-0 with 5:30 to go in the quarter. That score would prove to be the last one of the half, as both defences dug in and limited the next few drives,” continued Jensen.

During the break, the coaching staff made sure players stayed focused heading into the final two quarters. With a big lead on the board, the coaches wanted to make sure the players didn’t take their foot off the gas.

“Now, sometimes going into the half with a lead like that can be a bit of a trap. It’s tough to make adjustments when things have been working, and you always worry about a little bit of complacency setting in. So, we drove home that the players needed to treat the second half the same way they treated the first, and just keep it coming. Of course, it was time to start seeing what the second-stringers could do, as we made plans to rotate some other guys in,” added Jensen.

And starting in the third quarter, the Rebels picked right off where they left off heading into the break.

“Well, the boys took that message to heart and came out of the locker room guns a-blazing. A quick five-play series was capped with a touchdown pass to fullback Kyler James to go up 35-0 three minutes into the half. Credit to the Wolverines though, there was no quit in them, and they kept bringing it, finally reaching paydirt on an incredible long pass, followed up by a one-yard touchdown plunge. The Rebels defence wasn’t going to make it easy for Canmore either, though, as defensive lineman Tyson Harker was able to break through and block the extra point attempt, keeping the score 35-6,” confirmed Jensen.

With one quarter left, the Rebels had a big lead, but once again, the coaching staff asked for the team to continue to work hard with each play, whether on offence or defence.

“The first bit of scoring in the fourth quarter was again the Wolverines, as an attempted field goal went wide, but sailed through the endzone to give them a single point, making it 35-7. The teams went back to trading drives, until just under two minutes left, when defensive lineman Cohen Broadbent was able to intercept a tipped Canmore pass and set up a 22-yard Rebels field goal to cap the scoring at 38-7,” added Jensen.

Looking at the production on both sides of the ball, the coaching staff was happy with the performances from their players.

“Offensively, Lund hit on 13 of 22 passes for 276 yards and five TDs, with another 16 yards rushing. Brennan Abela had 29 yards rushing to go with a successful field goal. Receiver Mason Werewka lead the day with two catches for 104 yards and two TDs, followed by Colby Hansen with three catches for 83 yards and a TD, Kyler James with five catches for 40 yards and a TD, and Aiden O’Connor with two catches for 42 yards and a TD. Defensively, linebacker Allen Clements lead the way with five tackles, plus a QB sack. Linebackers Konner Unser and Bryden O’Connor were in on three tackles apiece, while Evan Rabusic and Nathan Keeping each contributed two sacks. Blake Bareman and Matthew Gensorek contributed one sack each, Kyler James forced one fumble, and Cohen Broadbent had an interception,” continued Jensen. “I couldn’t be happier with that performance. The defence was lights out good, with the only blemish coming on an incredible pass. Offensively, we moved the ball well and found the endzone often, so there’s not much to complain about. That was our last home game of the year, and for the seniors, that meant it was the last time they would ever play on our home field. Some of them have played on that field for 10 years, more than half their lives! So to get a win like that in a Provincials game is pretty special for them.”

While no more home games are coming for the Rebels, they still have plenty of work to do before the end of the season. The Rebels now turn their focus to their next opponent — the Drumheller Titans. Drumheller has been a provincial rival with the Rebels over the last several seasons.

“Now, we turn our attention up the road to the Drumheller Titans. That’s a team that we have had some absolute wars with in Provincials over the last five or so years, so we know what we’re in for. They knocked us out of Provincials in the last full season we played, 2019, so there is a bit of motivation for revenge there. But they’ve had a very successful campaign so far and finished the regular season ranked second in the Province in Tier 4. I expect to play a super tough game here and hope that this is where the experience from playing all of those tough, higher-tier opponents earlier in the season pays off because we know the Titans will bring it. Time will tell if we’re up for the task,” stated Jensen.

The Rebels head to Drumheller on Saturday for the ASAA Tier 4 Provincial semi-final with kickoff set for 1 p.m.