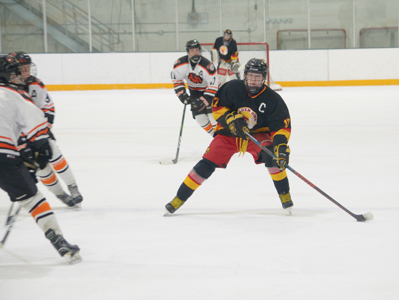 The Taber ‘AA’ Golden Suns teams were back on the ice this past weekend as South Central Alberta Hockey League action was in full force.

The U13 Suns had a single game on the calendar this weekend as they faced off against Medicine Hat Hounds Black at home on Saturday.

In an effective offensive showing, the Suns skated to an 8-2 win over Medicine Hat.

Truett Moeller got the party started with an unassisted goal in the first and Mason Noble followed up later in the period. Noble would continue his scoring touch in the second where he collected another tally. Moeller would also find the back of the net once again to give the Suns a 4-2 lead heading into the final frame.

Noble would collect a hat trick with another goal in the third while Liam Okell scored a single and Nixen Miller potted two to give the Suns an 8-2 victory.

Devin Groenenboom had three assists on the score sheet while Miller and Ryan Serfas had a pair, and Moeller, Okell, Heston Hansen, and Foster Weatherhead had singles.

The Suns ended up outshooting the Hounds 39-29 in the game and they collected one power-play goal and two shorthanded goals en route to the win.

The Golden Suns have a 5-2-1 record, good for third in the South Conference.

The next action for the U13 Suns comes on Nov. 21 when they hit the road to face off against Medicine Hat Hounds Black.

Like the U13 team, the U15 Golden Suns also had a single game this past weekend.

On Saturday night, the Suns welcomed in the Lethbridge Hurricanes, which resulted in a 6-3 loss for Taber.

The Hurricanes would take a 3-1 lead in the first where Cohen Zasadny potted the lone goal for Taber on a Tage Jensen assist.

In the second, the Suns would score another goal from Chase Stronge’s stick with an assist from Parker Young. Heading into the final period, the Suns were down 5-2.

In the third, Jensen would score another goal unassisted, but the Hurricanes would seal the 6-3 win after an empty-net goal. Ashton Carriere faced 32 shots in the loss.

After the following weekend of SCAHL action, the Suns sit in fifth place in the South Conference with a 3-7-0 record and six points.

The U15 Suns have a pair of games this coming weekend. On Saturday, they welcome in Medicine Hat SEAC Tigers for a 5:30 p.m. puck drop. On Sunday, they hit the road to Okotoks to face the Oilers.

7-2 loss against Wheatland Chiefs at home on Friday

The Suns took a 1-0 lead in the first thanks to a Ryan Holm snipe with assists from Hunter Vaerenbergh and Jaxxon Pavka.

The Chiefs would pounce in the second with five goals, while the Suns saw a goal from Ryan Millo, with assists from Rhett Klemen and Pavka.

In the third, Wheatland would add another pair of goals, resulting in a 7-2 win. Landon Porteous was busy in net as he faced 49 shots in the loss.

On Saturday, a 10-1 loss at home against CBHA Rangers.

The Suns’ lone tally in the game would come in the second period where Connor Eldridge found the back of the net. Pavka and Millo collected assists. Porteous was busy again as he faced 44 shots in the game.

Taber sits in fifth place in the South Division with a record of 2-7-1 and five points.