Norcrest parent recaps an exciting end to the season 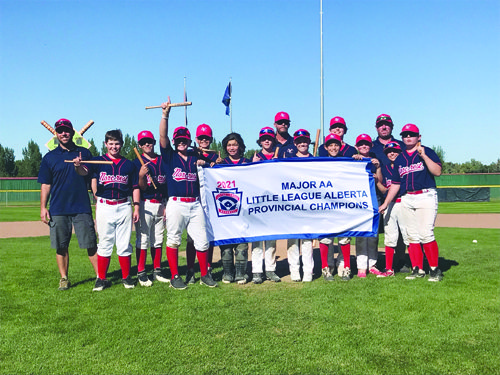 The Norcrest Major AA team is made up of kids from Taber, Bow Island, Foremost, Coutts, Coaldale, Lethbridge, and Cardston. Some were kids who tried out for the Lethbridge Little League team and weren’t chosen. For others, this is the only team that exists in the area. The coaching staff consisted of James Olson, Josh Nowlin, and Robin Gaskell. The team formed at the end of July with practices in Coaldale twice a week and then tournaments starting the first weekend in August with a few exhibition games the last weekend in July.

I think the most amazing thing about this group of boys aged 10-11 is how they came together as a group who didn’t know each other (a few had played together in the past but most had never met before. My son, Ryley Jensen, Roan Bosch, Solomon Olson, and Finn Nowlin played together in 2019 summer ball and Dakota, Ryley and Solomon played in the short house league season this year for Coaldale).

With tournaments in Medicine Hat, Calgary, Edmonton and then the championship in Lethbridge, it was clear this team was becoming a single unit. At Medicine Hat’s tournament, the team had two wins, two losses and a tie. The final game was a hard fought loss to Medicine Hat on home turf, with the crowd behind the kids who lived right there. The game started off tough with the first out for Norcrest contested by Medicine Hat and being overruled. That continued in Medicine Hat’s favour for two more contested calls that were overruled, again in Medicine Hat’s favour. Finally late in the game, Norcrest was making a comeback and had a call made in their favour. The team ran out of innings, but put up a great fight to comeback from an eight-run deficit to finish 10-8 Medicine Hat.

That weekend must have lit a fire for these boys because the following week in Calgary, they went 4-0, handing the top-ranked Lethbridge team their first and only loss of the three weekend regular tournaments. The weekend to follow was in Edmonton and Norcrest worked hard winning three games and losing one nail biter 7-6 for Lethbridge. The final out came at home plate when Max Probe slid into home and was called out by the ump. It was a close call; it looked like Max had slid in under the tag. That game, Norcrest had gone four innings without a run and then came back hard in the fifth and the sixth innings to give Lethbridge a close game.

Pretty good for a team who had only been together a month. Friday’s game, Norcrest won 19-14 over Rocky Mountain. Nerves were showing a little bit and the wet weather didn’t help much. The following day, Norcrest played Calgary West winning 18-9 and then lost to Calgary South 7-0 in the afternoon. Every hit seemed to go right at an opposing player and Norcrest knew they couldn’t let that get them down. At the Sunday morning semifinals, Norcrest was number one in their pool playing the second ranked team in the other pool. That meant they played Medicine Hat to see who would be in the finals. It was such a close game — at one point a player from Medicine Hat came up to bat with Solomon Olson pitching (he pitched the entire game except the last few batters). He saw the pitch and made a beautiful hit, home run with two on base. Bittersweet for Norcrest as they worried they had lost the game. Later the team found out the batter had been at try-outs for the Medicine Hat team when his house caught fire and burnt, taking with it his first ever home run ball. All he wanted was to be able to get that back and in this game he was able to do just that. We loved hearing about that and finding out the boy’s mom was in tears telling one of our parents about her son and his home run. Good for him! The game came down to the sixth inning tied 8-8. The lead off batter, Ryley, walked and then stole second. Solomon then came up to bat after pitching a good game and hit a fielder’s choice, bringing Ryley in for the walk-off win.

The final game was played that afternoon — Norcrest against Lethbridge. Randon Lauwen from Taber was the pitcher and he pitched an amazing game, all the way to the second out of the final inning. Lethbridge came out with a quick three-run first inning and that left Norcrest and many parents and grandparents in the stands with a little anxiety. Norcrest fought back with one run in the third and then in the fourth, a bunt by Ryley Jensen brought Junior Sun (walk) and Cole Klippenstein home and left Ryley at third. Ryley made it home, but was sent back to third by the umpire when Lethbridge said they had called time. After a tough throw to third left Ryley safe and a missed throw to the pitcher had allowed Ryley to make it home with the go ahead run. The next batter struck out with Ryley still on third base. Roan Bosch came up to bat and made a great hit, bringing Ryley in for the go ahead run and he was on second. The next two batters, Lauwen and Braeden Gaskell also got on base and brought Roan home which made it 5-3 Norcrest. Norcrest held Lethbridge to the original three runs the rest of the game, with Randon doing some excellent pitching. Dakota Hurst came in for a run in the fifth inning making it 6-3 Norcrest. In the final inning, top of the sixth, Randon continued to pitch and faced two Lethbridge batters, striking them both out. He was then out of pitches and Ryley came in to close the game. He was able to strike out the next batter and Norcrest won the championship! Who can forget some of the other plays…a great catch by Foster Weatherhead, great back catching by Braeden, but all together just great play and perseverance by all the boys.

It was a great summer/month of baseball. Overall, seeing the team develop and eventually succeed in the championship was a great reward for the parents who dedicated a lot of time to get the boys to practice and games. The parent group developed into a pretty close group and I know we will miss the time spent together cheering and supporting them. Probably the thing that stands out most is the way these boys came together as a team and had so much fun! The coaches did an amazing job of teaching the boys, some who had little baseball experience I was told, and leading them down this road. Coach Olson, Coach Nowlin and Coach Gaskell built this team with drills and hard work and a focus on sportsmanship, something these boys and even the parents appreciate still.