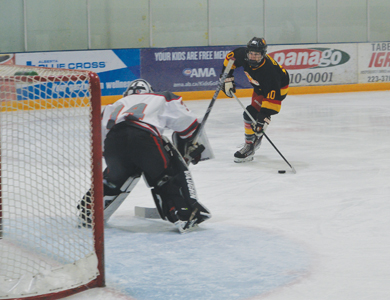 The Taber ‘AA’ Golden Suns have seen it all over the past year and a half.

From games and seasons being cancelled, to restrictions only allowing for practices, the three teams — U13, U15, and U18 — have their eyes set for a return to a normal, pre-COVID season in 2021-22.

Tryouts for all three teams are set for later next week, with the season to start shortly after.

“Numbers are reasonable, for sure. They’re probably not where they were last year or the year before, but we’re still days away from the start of tryouts, so those numbers will probably go up,” said Kevin Serfas, president of the Golden Suns in an interview with the Times in late August. “So, I don’t think we’ll be down a whole bunch. I know numbers in other areas are down a little bit — Medicine Hat and Lethbridge have started their ‘AAA’ tryouts and those numbers seem to be down a touch. All in all, I think we’re sitting not too bad.”

When the season does kick into gear, the group is anticipating a return to a normal pre-COVID schedule, albeit with a few minor changes.

“We’re anticipating a full pre-COVID start. No one has told us any different, so that’s what we’re anticipating. The only change is Cranbrook has usually been in the league and they are not this year. There are still some questions regarding inter-provincial play and we couldn’t wait that long, so that’s where we’re at,” added Serfas.

With tryouts on the horizon, each coaching staff is preparing for a busy start to September.

All Golden Suns teams have set their coaching staffs for the 2020-21 season, and two of the three will see some familiar faces.

“We’ve got full coaching staffs in place. We have Lynn Degenstein for U18, and he’s been with the program for five or six years. He’s moved from U13 to U15 to U18. I’m coming back for my fourth year for U13 and we’ve got a new coach coming in for U15, he’s younger and not a parent — Jaden Odland,” stated Serfas.

“It’s exciting, we have our U13 group who didn’t get a game in. It’s been since March 13, 2020, since I’ve been on the bench. We ran a lot of practices since then, but I’m definitely looking forward to getting back on the bench with the kids. The kids are excited to hopefully have a somewhat normal year and move on. Different associations, mainly in the bigger cities, they still have some restrictions, but for now, we’re rolling with it,” continued Serfas. “We’re looking forward to playing some games back in Taber again, and seeing fans in the stands.”