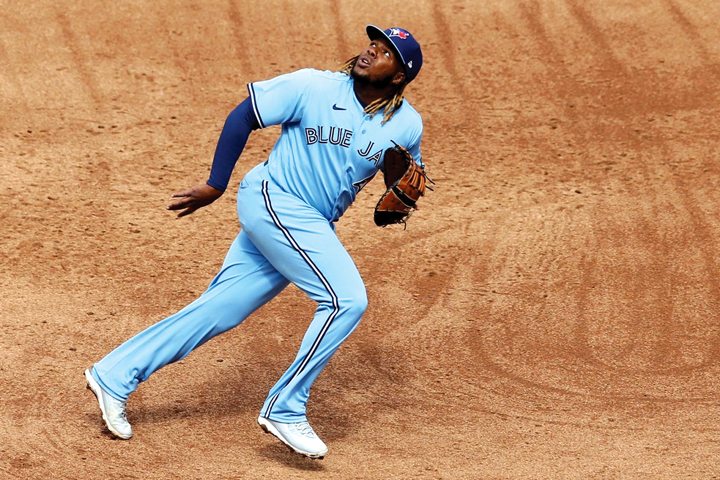 The rise of Vladimir Guerrero Jr. from the minor leagues to majors was quite astonishing when you think about it.

The Blue Jays signed him as an international free agent in 2015 and from there he progressed through the Blue Jays minor league system — eventually becoming the number one prospect in baseball. Expectations were obviously sky-high when Toronto called him up on April 24, 2019.

Before being called up, Vlad was hitting .367 with three home runs, eight RBI and getting on base (OBP) at a clip of .424.

He ended up getting 514 plate appearances that season in the big leagues, accumulating an average of .272, an OBP of .339 and hitting 15 home runs.

While the numbers weren’t nearly as good as they were in the minor leagues, they were still pretty solid for a 20-year-old. The biggest concern was obviously his fielding at third base, as he committed 17 errors in 265 fielding chances —which resulted in a .936 fielding percentage. Overall, it wasn’t a season that would be written in the history books, but after seeing Juan Soto crush the ball in 2018 and 2019, Jays fans were hoping for more. The 2020 season saw another solid Vladdy season, and under the circumstances, I don’t think it was a big deal he didn’t break out offensively.

The move to first base was quicker than a lot of people had anticipated, but it was something everyone knew was coming eventually.

This season, Vlad noticeably trimmed down and looked very good in Spring Training. So heading into the new season, expectations were once again as high as ever — and so far Vlad has been the cornerstone of the Blue Jays offence. He’s absolutely crushing balls early in the season.

He’s twelfth in the league in average exit velocity at 94 miles per hour and he’s hit the fourth hardest ball this season at 116.3 MPH off the bat. But it’s not just that — he’s also getting on base with both his bat and his eye. He’s hitting a massive .389 and has an On Base Plus Slugging of 1.174, as of the morning of April 20.

And of course, it’s early, and those numbers will obviously come back — but would it really be crazy to think he can get bat well over .300 this year? I don’t think so.

In watching the first games of this early season, he looks comfortable in the box no matter what count and it’s obvious no pitcher is going to intimidate him. He’s already faced Gerrit Cole multiple times and in the first game of the season, Vlad laced a single up the middle at 114.1 MPH — which is the hardest-hit ball the Yankee ace has surrendered in the Statcast era (since 2015).

Last season he hit homers in 60 games — this season he’s already up to four in 16 games.

I think it’s safe to say he’ll hit a career-high in home runs considering the most he’s hit in a season is 15, which he did in the 2019 season.

With the Jays’ big signing of George Springer in the offseason, it was expected he’d be the straw to stir the drink at the top of the order. But with Springer on the IL since the beginning of the season, Guerrero Jr. has stepped up to really be the top gun for the Jays. If Springer can come into this lineup with Vlad swinging a hot bat and with Bo Bichette heating up, the top of the lineup will look incredibly dangerous.

So far, the Jays have been up and down, but the signs are there they can be a top team in the tough AL East.

If Vlad can continue to punish the ball, I can’t see him leaving the top of the order — whether it’s second, third or fourth in the lineup. Which is nothing but good news for the Blue Jays.

Despite a slower start to his career, it just shows that no player’s accession is like the other. Some had been real down on Vladdy, which was just asinine considering his age and now, let’s hope he can prove to everyone why he was the best prospect in the game just a few short years ago.