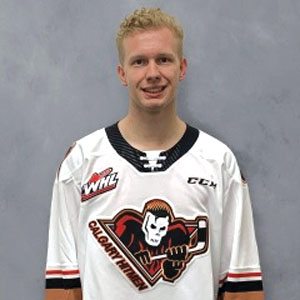 Thanks to some stellar play, including a 27-save shutout against the Red Deer Rebels, Taberite and Calgary Hitmen Brayden Peters was recognized as the WHL “goalie of the week” during the first weekend of March.

Peters, a fifth-round draft pick of the Hitmen, got into his first game of the season on March 5 — where he was rock solid, posting a shutout.

Peters was also the first WHL goalie to rack up a shutout this season.

This past weekend, Peters once again found his way into the Hitmen crease, where he struggled in the first game against the Medicine Hat Tigers on Friday night.

The Hitmen would lose 6-2 and Peters allowed six goals and posted a .818 save percentage on 33 shots.

Despite the small setback, Peters and the Hitmen would turn things around on Sunday night — where they skated to a 5-4 win. The Taber-born goaltender faced 41 shots, allowing four and posting a .902 save percentage.

In five games, the Hitmen have won two, lost two and gained one point in an overtime loss, which sees them in fourth place in the Central Division.

The Hitmen come to Lethbridge this weekend for a three-game mini-series against the Hurricanes.

They’ll close out March with three games against the first-place Edmonton Oil Kings with the rest of the schedule being announced in early April. The WHL sees a 24-game schedule for the Central Division with no spectators in attendance, but fans can watch games at watch.CHL.ca. All games will be inter-divisional play within the provincial boundaries of Alberta.