Gauging the state of baseball 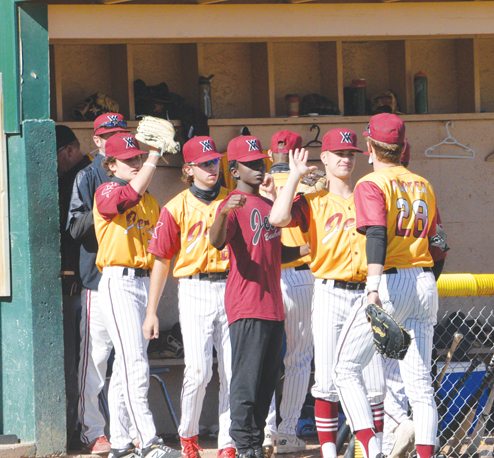 It’s been played for generations and has seen its fair share of changes, but baseball continues to be America’s favourite pastime.

While many baseball purists suggest the game hasn’t changed all that much, playing, coaching and spectating have all experienced some type of amendment generation to generation.

To get a better view at ground level, the Taber Times gauged the state of the game with Vauxhall Academy of Baseball head coach Les McTavish, Grade 11 infielder Hayden Hleucka and parent Andy Lenehan to get their opinion on where baseball currently sits.

1. What are your thoughts on increasing strikeout rates in baseball and less pitching to contact?

McTavish: “I think it’s a combination of pitching and hitting. For hitters, it’s become about the launch angle, home runs and not so much emphasis on contact. Then combine that with pitchers who are starting to throw harder and harder, and they have better stuff. They’re throwing harder than they ever have and hitters are stronger than they ever have been. Do I see it with the Jets? I see the velocity trend — kids are throwing harder but I don’t see more strikeouts. Our coaches, Blaker (Joel Blake) and Coach K (Jim Kotkas), they spend a lot of time working on hard contact and line drives as opposed to lifting the ball.”

Lenehan: “My thoughts are that it’s healthy for the game to evolve so the skill sets of the players are showcased. Currently, that is represented by K’s and long balls, which is entertaining in my view. However, I equally enjoyed the style before the current trends.”

McTavish: “I still think it’s part of the game. It’s not a huge part of the professional game but it is part of the college game, and I think you have to understand your tools. If you’re a player that can run and needs to be able to move the ball around the ballpark, bunting needs to be a part of your game. I don’t understand why it wouldn’t be at a younger age. If the third baseman is playing back, and if you have the ability to bunt, why wouldn’t you take the free base? When you become older and become a man, home runs become a different part of it and the defenders become really exceptional at that age, too. I just think it’s important to be able to handle the bat. You could be in a slump and you can drop a bunt down and get a base hit, it could get you out of a slump mentally.”

Hleucka: “I feel like there is a time and a place to bunt. Whether it’s your a lefty hitter and there’s a lefty pitcher on the mound and you put down a drag bunt. Or just a straight sacrifice bunt.”

Lenehan: “Completely for it. The name of the game is scoring runs and that involves getting on base any way possible. More bunting would cause less shifting by the defence, which I feel would be positive.”

3. Thoughts on the increase of hitting for power instead of contact?

McTavish: “I think we need to focus our attention on hitting hard line drives. If you hit hard line drives, home runs will come. At the end of the day, the key is to barrel the baseball as frequently as possible and hit the ball as hard as you can on a line. If you catch it out front a little, guess what? It’s going to go up in the air a bit more. If you catch it a little later, you may hit a ground ball. To me, you need to become a good line-drive hitter first. As you get stronger and more mature, lifting the ball can become a more important piece. I also think it depends on the hitter. Our three-hole hitter, if he’s big, strong and can hit the ball out of the ballpark, he should handle the bat different from our leadoff or nine-hole hitter. They need to find a way on base. The expectations are different.”

Hleucka: “Obviously the statistics in the show, home runs are higher and so is the strikeout ratio. I just focus on hitting the ball up the middle and trying to get on base, not so much going for a home run every time.”

Lenehan: “If that’s what is generating interest from fans, especially younger ones, let’s roll with it. I love baseball regardless of what skills are being emphasized.”

4. How much do you value the run game as a fan, player and coach?

McTavish: “At our level, it’s an important piece. And you don’t always have to be fast to be a good base runner. At our level, if you see the ball in the dirt, you should be advancing bases. It puts pressure on the defence and the pitcher. Always look to take the extra base and you do that by being smart and understanding your abilities, I think we should always look to take the extra base. We’re not super fast this year, but you learn to hit and run and handle the bat that way. The majority of our players are going on to become college athletes, and with college athletes, bunting, running and hit and running are part of the game.”

Hleucka: “As far as the run game, it’s gone down but I feel like it’s gone down because the home run ratios are higher. With launch angles, people are trying to hit home runs. It all depends on who the player is and what the team looks like. Some teams play small ball and there are teams with big boys who hit home runs.”

Lenehan: “I really value the run game and see no reason that stealing bases can’t still be a weapon, despite the emphasis on power hitting and dingers. It’s the offence putting pressure on the defence and creates more activity, which is a plus.”

5. Are you a fan of the universal Designated Hitter in the MLB?

McTavish: “I like the universal DH. I think it adds some offence to the games, it certainly adds another positional need and the last part is, I would hate for pitchers to get hurt hitting. They’re facing some really good guys and I enjoy watching the National League a lot but I think at some point in time, a universal DH is where the game is going to go.”

Hleucka: “I’m a fan of the universal DH. I think it adds more character into the game. Some people say the pitchers hitting is fun but I’m more of a fan of having that DH.”

Lenehan: “I feel there should be DHs in both leagues. (It) leads to more offence and enables an extra player to participate in every game. Most pitchers struggle to hit at the MLB level, therefore, it’s generally not entertaining to watch them take two strikes then wave at a third one to strike out.”

6. Should steroids users be in the Hall of Fame? (Roger Clemens, Barry Bonds etc.)

McTavish: “I don’t think they should be in the Hall of Fame, currently with the way it sits. I also understand, and a lot of people realize a lot of the home runs they hit in the steroid era were off pitchers who were taking steroids. It wasn’t just hitters on steroids, I think there is a place for that era. There may be players who took steroids who didn’t get caught and maybe with the Hall of Fame, it’s a separate entity. They were the best players during that time and there were great players during that time that didn’t take steroids, and they deserve even more accolades. I do think there needs to be some acknowledgement because it wasn’t just a small number.”

Hleucka: “I don’t think they should be in the Hall of Fame. I feel like there are guys who didn’t use steroids that were just as good that don’t get as much credit and they should be valued more.”

Lenehan: “This is a tough one and I don’t have a strong opinion either way as I feel you can make a solid argument for both sides. I would tend to lean on the side of keeping them out of the Hall. Baseball is, and always has been, an awesome game. A game that values credibility and strong values. Sends a good message that they can’t get in because there are consequences for doing things that are not right, even when lots of people are doing it. However, no denying that watching Rocket and Bonds do their thing during their prime years was special.”

7. What are your thoughts on the Houston Astros cheating scandal?

McTavish: “Certainly they were cheating, and I wish I knew more about it. They were cheating and they took it to a whole new level. You start thinking about what the other teams and the other people that were affected by how they cheated — the pitchers who were sent down and never got up or the Dodgers who could have won the World Series. I think baseball always does a pretty good job of taking care of itself. They (Houston) were probably the happiest group that didn’t have to go around and play games in front of fans last year. I think as we go forward with things, and their punishment is served, then they have to have the ability, and the option to earn their (place) back in the game. I would imagine there is a lot more to it than we probably know, too.”

Hleucka: “I wasn’t a fan of that. It wasn’t right, just like steroids. I don’t condone that and I don’t feel it was right. I think they should be punished properly.”

Lenehan: “Credibility and integrity are very important. The old art of sign stealing is one thing but the actions of the Astros was over the line.”

8. Which MLB stadium would you want the Jets to play in this upcoming spring season?

McTavish: “ I’ve been there, and was able to coach with the World team — Fenway Park (Boston Red Sox). I would love for our 22 players to have the opportunity to play at Fenway Park. It’s incredible. I’ve been there as a fan, as a coach and it doesn’t get much better than Fenway Park. That would be number one and if I had to pick a runner up, since I’ve never been there, I’d say Wrigley Field (Chicago Cubs).”

Hleucka: “Being from Canada, I’m a big Blue Jays fan so obviously playing at Rogers Centre is pretty cool. If I had to choose though, it would be Chase Field in Arizona. It’s one of the nicest and one of the more iconic stadiums of the last several years with the swimming pool in centrefield.”

Lenehan: “Very tough question, too many great answers. Would love to see them play in any MLB stadium. Teams have done an amazing job over the past ten years refurbishing their venues. It will be awesome to see stands full of fans, hopefully during the summer of 2021.”