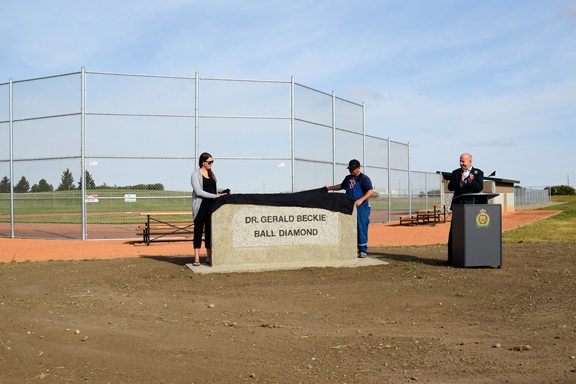 With four diamonds now at Ken McDonald Memorial Sports Complex, the hope is to add a concession in the near future.

The Kinsmen Club of Taber approached the Taber Recreation Board at their regular meeting on Dec. 3 to explore the possibilities of adding a concession in the middle of the four diamonds.

“The Kinsmen would like to continue improvements at the Ken McDonald Memorial Sports Complex with a concession to be built in the middle of the four diamonds. The Kinsmen are requesting to enter into an agreement with the town, to mirror the agreement for the fourth ball diamond, and to grant fund the project in the amount of $97,025.12,” explained administration’s report.

It was further explained to the Times the remaining funds will come from savings from the previous project to expand the number of baseball diamonds.

“We have money in the amount of $250,000 in the capital budget for the fourth ball diamond. We grant funded the kinsmen $150,000 to build the diamond because between them and the Baseball and Softball Enhancement Society, that’s what they figured they could build it for, and they stayed within their budget,” explained Dawn Phillips, director of recreation. “So they had about $5,000 left to spend on trees in the spring. So the remaining amount, with some other expenses, is ($77,211.11). We are recommending it goes back into capital reserves. If council chooses to fund this project, that would offset the amount needed for the town to do it.”

A motion the recreation board accepts the presentation by the Kinsmen Club of Taber as information and recommends the Ken McDonald Memorial Sports Complex upgrades project be presented to council for consideration was carried.

The presentation was brought forward to town council on Dec. 21.