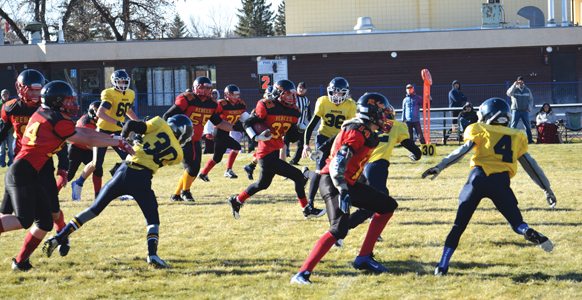 THAT’S A WRAP: The Taber Rebels bantam football team travelled to Magrath this weekend for their final game of the season and now all Rebels teams have wrapped up their unconventional 2020 season. SOUTHERN ALBERTA NEWSPAPERS PHOTO BY NIKKI JAMIESON

It was a football season unlike any other in recent memory.

With the COVID-19 pandemic in full swing, uncertainly was in the air over the summer, as the real possibility of a cancelled 2020 football season set in.

But in the end, Taber’s atom, peewee, bantam and senior teams managed to each have seasons, albeit a little bit different than normal.

“I have to say, I am extremely proud of what Taber Football was able to pull off this year, given the difficult circumstances,” said Taber Rebels Football president Jason Jensen.

“Despite all of the challenges, we managed to field teams at all four levels and for the three minor level teams, they were able to play close to a full season’s worth of games, under a modified format. I can’t thank our board of directors and coaches enough for their dedication and hard work.”

To make it all happen, Jensen added there were a lot of logistics to run through before the season could begin.
“Our first obstacle was just figuring out if we were even going to be able to practice, let alone play games,” he said. “This all started back in May, when Football Alberta partnered with AHS to craft a return-to-play protocol, meant to cover multiple scenarios that could play out with the pandemic.”

Through the efforts of all those involved, many football programs across the province were able to get off the ground late in the summer.

“They did a great job of getting coaches and football administrators such as myself involved with the process, so we had pretty cohesive effort going on province-wide to make this happen,” said Jensen. “To begin with, we were able to create a system where teams were allowed to start practicing under enhanced sanitary protocols, with daily screening requirements, and diligent contact tracing records being kept. In the next draft, protocol was changed to allow limited-format games, as long as each team kept their total numbers to 25 or less, including coaches, in order to form a cohort of 50 to play.”

The rules, regulations and protocols did not stop there, as Jensen added to ensure leagues and exhibition play proceeded as safely as possible.

“Teams were also required to wait 14 days in between games if they wanted to switch to a new opponent,” said Jensen. “Under that format, our bantam and peewee teams each managed to schedule six games, and our atoms played four. Due to a lack of available opponents, our senior level team was only able to get in two games, but given the circumstances, that was about the best that could be expected.”

Getting things sorted out on the field was only part of the equation, however.

“Once we knew we would be able to play, our next challenge was to figure out how we were going to pay for everything,” said Jensen. “Now, we’ve always tried to keep our fees low, which means that we rely on, variety
of sponsorships and fundraisers to keep operating. This year, given the difficult economic situation, a lot of the sponsorship dollars that are normally available to us just weren’t there. This posed a real concern, as a large portion of our expenses are static, whether we play 50 games, or we play none. Helmets still expire and need to be replaced, insurance and fees still need to be paid, and so on. On top of all of that, there were added expenses for sanitizer and disinfecting supplies that normally aren’t required.”

Getting all of that taken care of, to ensure a successful season, took the work of many within Rebels Football.

“Thankfully, our board members were able to put together a raffle, and with the help of our dedicated parent groups, we made enough off of that, plus the few sponsorships we were lucky and thankful to get, to keep everything afloat and running,” said Jensen.

All in all, 2020 presented a wide range of challenges, as Taber Rebels Football was ultimately able to meet its goal – allowing youngsters the opportunity to play the sport they love.

“This was a season that required a lot more hoop-jumping than any other I’ve been involved in, but in the end, with the help of a fantastic group of volunteers, we were able to give the kids a chance to get out on the field and play,” said Jensen. “With all they’ve been through with this pandemic, I think that was something that was dearly needed, and made all the hard work worth it. I’d call that a successful year.”