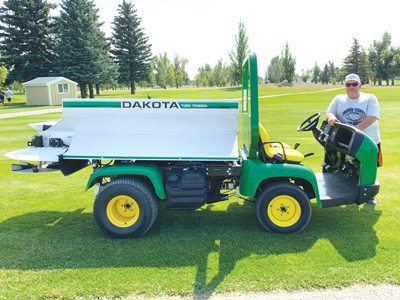 New Taber Golf Club course superintendent Brian Murray has been settling in nicely, as the warm summer continues to roll on for links enthusiasts.

“It has been a great transition. We have a really good crew who is very, very talented,” said Murray, who started officially on July 1, replacing long-time former course superintendent Mike Galvin.

In the golf business for 12 years, Murray started his training in Dublin, Ohio with course and golf management.

“I learned from guys who worked on PGA courses and the different marketing strategies,” said Murray, who got his start as a general manager and course assistant superintendent for five years. “We’d go in with different unique marketing strategies for a bunch of different courses to entice play. There were new tools for the trade-in taking care of the courses. The equipment nowadays, it’s getting a lot easier to maintain courses and to work them. You get excellent results quicker. If you really want, you can really manipulate the speeds of the greens and make them super fast or super slow. It’s a matter of if you add more water and sand, or if you roll it or don’t roll it. Or I just don’t water it and dry it up to make it go real fast. There are a lot of techniques.”

Murray added golf courses can be tough places to make money at, where courses should be seen as a business first and a recreational facility second.

“The whole idea is to drive business to the golf course and to get people here, and the first thing you need is a good product to play. If you don’t have good greens, you don’t have a golf course and guys won’t come back. It’s been like that forever. Your tees can be hard, your fairways can be as dry as a bone, but if your greens are soft and fast, they’ll come back,” said Murray. “You want to have people put your course on their schedule (in southern Alberta) in the product you put out.”

Coming over from the Pincher Creek golf course, in the years Murray has been in the course maintenance game, he has seen the longest course seasons range from early March to late October up north in Canada.

“I’m learning the weather here in Taber, and it gets hot. Some people hate it and can’t wait for winter, but I love it. I love the heat. Optimum times, the earliest I’ve ever opened a course was in Pincher Creek, which was March 10 and there was no snow. The latest I’ve seen is the end of October (in Canada),” said Murray. “In the States, we didn’t close until Dec. 15 and we opened Feb. 1. We had six weeks of downtime. In golf management, you can see how a lot of different golf clubs do things and you learn a bunch of different techniques from different superintendents. In this business, we all share knowledge. There are 12 guys in different pockets I can call tomorrow. We can all work together, right from the sales guys, all the way to the superintendents. With today’s technology, I can shoot a video and Facetime someone of an exact situation and put together a solution right then and there and get after it.”

Murray has learned in his short time at the Taber course that it holds a lot of water when it rains which makes drainage a priority.

“There are effective ways to get drainage on the course that doesn’t cost thousands and thousands of dollars with pumps running day and night. You find the low spots and you find a guy who is willing to volunteer his time who has a drill on the back of his truck. If he can drill down 20 feet with an eight-inch auger and drop perforated four-foot pipe down there and fill it with river stone, you have just made a French well. You keep it below the grass, put a little screen on top and when the water runs, it drains into there,” said Murray. “It’s a very cost-effective way and it’s new technology. Some courses are doing it and they are finding great success not having to run pumps all the time.”

With the course left in great shape from Mike Galvin, Murray has concentrated on softening the greens and speeding them up.

“The guys are going after the pins now. They are not where I want them yet, but we will get them there. We also opened the course up a bit more to make it more playable,” said Murray. “We’ve opened up the fairways and if you score better, you typically come back. If you are hitting a ball off a tee and you can’t hit it to the fairway, let’s move the fairway closer to the tee. The pace of play gets faster. It’s all how you manipulate the grass in how you cut it and groom it. Hole 4, we brought back 150 yards towards the tee box. Hole 11, we opened it upright to the pond. Hole 11 was risk/reward. If you clear that pond on your drive, you should be able to land on the fairway and then have a really good shot coming in on your second. If you clear that pond, you shouldn’t be penalized going into the rough unless you are way off the fairway and put it in the other rough.”

Having also worked courses in Indiana and Saskatchewan, Murray added sometimes people are resistant to change, while others thrive on it.

“For me, it’s always about being a business first. If you can make that business thrive, you are doing the right thing. For me, a lot of the time, it’s just going in and getting it done and deal with it later. People get used to it. I know these greens have been faster than what they have been. It will take people time to transition to that. Typically, what I have heard for years, is it was a bump-and-run course and that doesn’t attract a lot of golfers,” said Murray. “You want golfers that are seeking that pin. They are going for it, but they don’t want it to bounce off the green either. We still have a lot of work ahead of us as a crew going to get the greens where we want them, but they are coming along really nicely.”

What has also been coming along nicely is how the Town of Taber and M.D. of Taber councils passed motions to aid the golf course in funding new mowers. Also, seniors have helped with a lot of the course with various improvements.

“They re-did a bunch of the tee boxes, they did a bunch of cart paths…even the picnic tables, they’ve gone after it. It’s been really good to see a community come together like this for the sole purpose of improving the course. They funded it, and did it themselves,” said Murray. “They made improvements to the course that they wanted to see. Also, the Town of Taber and the M.D. of Taber donated money to the golf course to buy some equipment. I’ve never heard of that before. It’s always been a non-profit, make it work yourself. For the town and the M.D. to kick in, what a great relationship to have with them. They are making it work.”

In making the club competitive with surrounding southern Alberta courses, Murray added golfers need as many reasons as possible to check out Taber. Having a great, solid and loyal membership base, Murray added the bread and butter comes from green-fee golfers.

“If you can get an extra 600 people coming to golf your course a year because of the shape it is in, they’ll come back. Once they get here, once they are treated right with a great course and a great meal, they’ll come back,” said Murray. “It’s all about the experience.”

That experience for the Taber Golf Club is two sets of nine holes who have an identity all their own with different challenge levels.

“The front nine is wide open. You can really get after it on the front nine. You can spray your ball over the place and still find it. But, that will tune you up for the back nine because you have to be a lot more direct with your ball. If you spray it on the back, you are in the trees or the railroad tracks,” said Murray. “It’s a very unique feature on the course and is something I liked when I toured the place. It can be very challenging to someone just learning golf, so the front nine would be better. And as they get better at golf, they can do the back nine. You have all the challenges you want and the doglegs are great.”

When Murray interviewed for the job, he added the board of directors were very clear with where they wanted to go with the golf course.

“They have been very receptive to the ideas I have been bringing them and a new way of getting things done compared to the old way. No slight on Mike (Galvin), but this industry changes yearly. Growing grass is growing grass, but if you want to grow it fast and quick, there are all different types of chemicals you can buy, fungicides, insecticides, herbicides. You want to make it look good, but also have it play really quick,” said Murray. “If you play a round and it takes you five-and-a-half hours to get through, that’s brutal. If you can get out of here in three-and-a-half or four hours, that’s a good round. That’s a good pace of play and you’re not in the rough for 20 minutes looking for a ball. The first thing I did was lower the cuts on everything so you’ll be able to find your ball, especially with how wide open the front nine is. With the technology that is out there, it makes a superintendent’s job a lot easier. But, the biggest thing is the crew. They are very, very good. I’ve worked with some incredible people in the States, and they remind me a lot of them. They are faithful, they are on time and they do what they are told. They get after it, and if they don’t know something, they ask questions.”