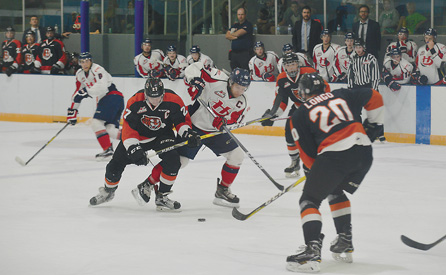 The start of the Western Hockey League season has been bumped back two months.

In keeping an eye on the ongoing COVID-19 pandemic that shut down the season in March prior to playoffs, the WHL announced last week it is now scheduled to open its 2020-21 regular season on Dec. 4. The league remains committed to playing a full regular season schedule of 68 games.

In June, the WHL had set Oct. 4 as the original date to drop the puck on the new season.

Thursday’s announcement means Lethbridge Hurricanes fans will have to wait another two months, but Hurricanes general manager Peter Anholt credited the league for making the call with the health of the players, officials, staff and fans in mind as the opening date of the regular season remains contingent on receiving the necessary approvals from government and health authorities in the six provincial and state jurisdictions in WHL territory.

“I have to tip my hat to the leadership of our league and how (WHL commissioner) Ron Robison and the board of governors have gone about their business,” said Anholt. “First and foremost, we want to play, but we have to do it in a proper way and that’s working with the health authorities. I know there has been a lot of communication with the health authorities in all the jurisdictions. We have four provinces and two states to deal with. I think ultimately that’s first and foremost.”

The WHL continues to have regular discussions with government and health authorities on the extensive safety measures the league is prepared to take to protect players, staff, and fans and to address issues such as spectator capacities and border crossings.

As the NHL returns to play in a bubble of fan-less arenas, the WHL will need butts in the seats when the puck drops.

“We need fans, we can’t play without fans,” said Anholt. “So it’s going to be interesting to continue to watch the NHL and how this works for them and their return-to-play protocol and when we can work our own return-to-play protocol and how it’s going to work for us and then hopefully we can add fans to the whole process. That is ultimately the challenge the Western league faces.”

That process will be laid out by the health region.

“That’s not really a hockey decision,” said Anholt. “It’s a health and medical decision and at some point when we know we can keep working through our challenges so people know they’re going to be healthy when they’re going to come to our games and abide by any rules that are going to be needed to be abided by, that’s the way it is and we’re no different than any organization. We’re not like the NFL or the NHL, we need fans.”

Player testing protocols will also be laid out to the teams, said Anholt.

“We’ll adhere to them strictly and make sure our players are healthy and our staff is healthy and billets and so on. It’s a big, tall order, but we want to play and we want to face up to the challenges to be able to play.”

With the new date set, teams can start looking to training camp as well.

“I think now that we know when the start date is for the regular season we can back that up and that will be a league decision also,” said Anholt. “Because it’s going to be a smaller camp. It won’t be a large camp, it will be a shorter camp. Those are easy things to work through. The hard part and the key part is the ability to play.”