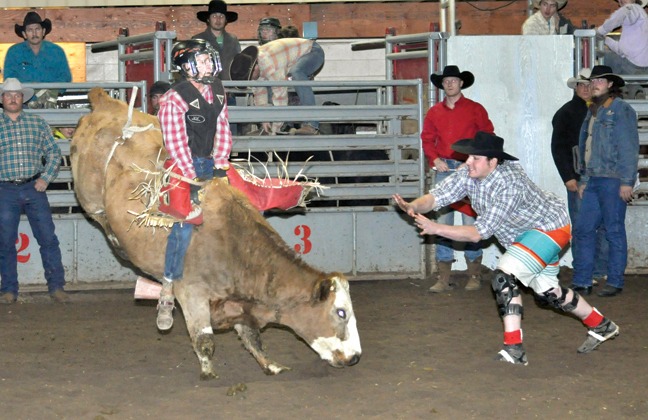 It wasn’t your typical night at the drive-in last week.

However, this production on the big screen was rated “B” for bulls.

Returning to riding after a 138-day hiatus from competition in Canada due to the COVID-19 pandemic, the PBR Canada Monster Energy Tour LIVE: Drive-In Spectacular parked itself in the Enmax Centre parking lot.

The first stop on the Monster Energy Tour trail since the resumption of riding, last Thursday’s stop was a two-ride affair, the PBR Cooper Tires Invitational in the afternoon — available only on TSN and the league’s OTT channel RidePass — and the PBR Built Ford Tough Invitational in the evening.

With COVID regulations preventing fans from entering the Enmax Centre to view the bucking and riding, Feature Productions instead brought the second show to spectators in the west parking lot via a 23-foot big screen.

“We’re not going to twist off the champagne bottle yet, but we’re pretty happy on how things went,” said PBR Canada general manager Jason Davidson after the first show. “We followed all the health regulations, and as you know bull riding is a very dangerous sport. A lot of these guys hadn’t been on any bulls for 138 days. That’s a long time since we were here in Lethbridge for our annual event. So no riders were hurt and we got some good scores on the board. I think most of these guys knocked the rust off.”

Dealing with pandemic regulations, Davidson said the only difference with the transport of the livestock was to make sure the livestock producers showed up within their time slot to get the bulls unloaded and do their personal screening, which everybody in the building had to go through.

“We had the luxury geographically in southern Alberta that nobody had to come too far. Some of the stock contractors came last night and travelled later in the day while the temperatures were a little cooler and unloaded at the auction market. Also, Josh Berezay’s ranch in Magrath housed a few of our animals (Wednesday) night.”

Riders were required to fill out a questionnaire following provincial rules and have their temperature taken upon arrival.

“Anybody who came in with a fever would have had to sit down and get retested,” said Davidson. “Fortunately we had none of that. It was all good on the temperature testing. They’re practising their social distancing and all wearing masks and keeping six feet apart.”

As for competing in an empty arena, Davidson said it was different, but the production team filled in nicely.

“I can definitely tell you with a lot of confidence that it was the quietest the Enmax Centre has ever been for PBR bull riding in the years of us hosting the event,” he said. “This is one of the greatest PBR crowds we entertain anywhere in North America and that was definitely missed. But what Feature Productions did, we have two 40-foot replay screens set up at either end of the arena and it really did give us an atmosphere. Ted Stovin, our music director, had the tunes rocking for us. We had some good rides, which gets the guys fired up. It was definitely different, but you know what? It felt like a real live event. We have a very professional group of individuals here and they all know their jobs. We’re doing TV and we’re doing ride passes. There are a lot of moving parts that keep it realistic like we’re at a live event. It doesn’t get any more live than tying your hand to a bucking bull and opening the gate. It’s on when that gate opens.”

In the afternoon show, Brock Radford of De Winton and Ty Ellis of Sonningdale, Sask., tied for the event victory, delivering 86-point rides in the championship round. Both riders earned a cheque for $2,688.98 in addition to 58.5 Canadian and 11.5 world points.