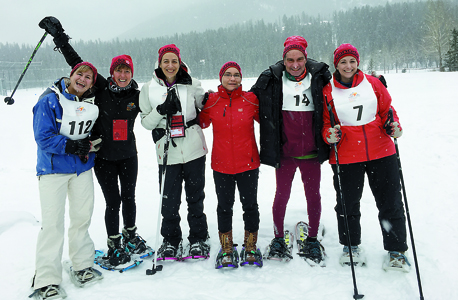 INSPIRATIONAL: Taberite Jan Clemis (second from left) and the rest of her Transplant Games competitors were celebrating the human spirit and the importance of organ donation on the world stage in Banff recently. TIMES PHOTO SUBMITTED BY CARLI BEKKERING

Jan Clemis has pledged to live life to the fullest ever since getting the gift of life from her son Blair of a new kidney a year-and-a-half ago.
That life was on full display recently at the 2020 World Transplant Games in Banff, where Clemis represented Team Canada and earned both a silver and gold medal in her pursuits in cross-country skiing and snow-shoeing respectively in her age group.

If one could medal in emotion, Jan would be at the top of the podium every time, as she was able to have family cheer her on in daughters Carli and Bonnie, and grandchildren, and a special surprise later on where her son Blair met her with a hug at the finish line of the cross-country event.

“To have the Games in our own back yard was really exciting. They (the family) were all there for the opening ceremonies on the Sunday. Being an Alberta girl, all the nation’s flags were on hockey sticks that had Humboldt Strong written on the tape of the blade,” said a teary-eyed Clemis, reminiscing of the tragic 2018 Humboldt Broncos bus crash that led to a spike in organ donation across the nation. “From the get-go, it was a really powerful event. It was a really powerful weekend all in all from start to finish. I got to meet people from all over the world with that common thread. We had a banquet and all the living donors were brought on stage and introduced. To be able to give Blair a hug and thank him at the end of the race for giving me a kidney and both of us doing so well a year-and-a-half out that I was able to participate in the Games.”

Jan has become fast Facebook friends with a female from Quebec, whose story is she is the proud owner of a 104-year-old liver.

“Her donor was 88 at the time. She joked about how her liver was born in World War I. That was heart-warming to realize. You hear people say ‘I’m over 70, no one wants my organs,’ but that’s not the case. She participated in five events in the Games because she’s got an 88-year-old man’s liver,” said Clemis.

“I’m kind of a water rat anyway. Teri Cook, one of the lifeguards at the swimming pool, she has already been coaching me for the swimming events,” continued Clemis, adding she is also planning on participating in the upcoming Canadian Transplant Games in August, which will be held in Winnipeg.

While the gold and silver medals were nice, Clemis added for simply the hundreds of athletes participatin in the Games, being healthy enough showed that everyone was a winner in the spirit of camaraderie, especially with so many touching stories from across the globe.

“There is life after transplants. I am trying to embrace every day. I am so grateful for the gift Blair gave me. I’m always telling him I’m going to honour the kidney. That’s one way I can in trying to live life to the fullest,” said Clemis.

Clemis is recruiting local organ recipients around the Taber/southern Alberta region to participate with her in the 2021 World Transplant Games in Houston to celebrate the spirit of life in its many forms.

For Clemis, the Games are symbolic of the importance of organ donation in getting a second chance to embrace what life is al about, with family getting extra memories.

“Kelly (Jan’s former husband), was the recipient of a double lung transplant in 2014, and this allowed him to walk his daughter down the aisle at their wedding, kick up his heels at Blair and Robin’s wedding, burst his buttons at Carli’s med school graduation, and see a little granddaughter, Harper, learn to giggle, run and recite animal voices,” said Clemis. “Although we lost Kelly in 2017, those three extra years with him were full of events and fatherly advice that my kids will cherish. There are many people waiting in the queue for an organ, be it liver, pancreas, heart, lung, stem cell, kidney — even donating blood is crucial to so many people. Although 90 per cent of people are in favour of organ donation, only 20 per cent have made plans to donate. Please remind everyone that it is of the utmost importance to express your wishes to your loved ones, because upon your death, your family decides whether or not you will be an organ donor.”