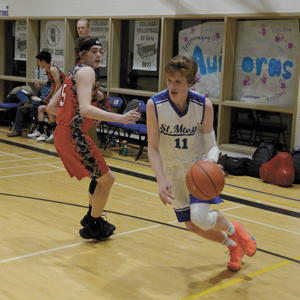 St. Mary Celtics boys basketball team continues to fire on all cylinders as it enters playoff mode for River Ridge and 2A zones.

The Celtics won its last two games of the River Ridge Basketball League regular season this past week with ease against Warner in a home-and-home series.

“We jumped out to a big lead both games and then kind of maintained it a little bit. We didn’t go full out (trying to run up the score) once we established a healthy lead,” said Ken Gabruck, head coach of the St. Mary Celtics boys basketball team.

The Celtics go into the River Ridge playoffs as the top seed and play the same Warner team in the first round. A win puts the Celtics up against the winner of Vauxhall/Bow Island on Thursday.

There is then a quick turnaround to 2A zones at Lethbridge College where the Celtics play the winner of F.P Walshe/J.T. Foster at 6:45 p.m. on Wednesday, March 11.

The Celtics go into River Ridge Playoffs and zones a little banged up with Seth Muller still nursing an injured ankle.

“He’ll probably be at about 90 per cent by Tuesday of next week,” said Gabruck, adding Carter Hendricks also suffered a thumb injury to his non-shooting hand during the last week of River Ridge play. “We taped it up Thursday and he played really well with it. We look forward to league playoffs and once you get into zones, you have to play your best ball games. One loss and you’re out.”