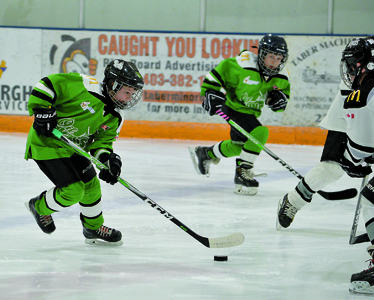 LIGHTING THE LAMP: Taber Oil Kings’ Nixen Miller was on fire when he had the puck (pictured), scoring 17 goals over four games to help his team to the gold medal at the Taber Arena. TIMES PHOTO BY GREG PRICE

Taber atom ‘A’ Oil Kings were gold medalists at its home hockey tournament over the weekend.

Oil Kings kicked things off on Friday at the Taber Arena with an 11-1 win over Cranbrook Royals.

On Saturday, the Oil Kings doubled up Sherwood Park Havoc 10-5.

Nixen Miller had a hat trick and Wiebe and Duell each scored twice. Kramer scored a single.

Oil Kings finished things off on Sunday with a 7-5 victory over the same CR Knights team in the gold-medal game.

Nixen Miller scored four times and DeBoer had two goals. Wiebe notched a single. Special teams were big in the win, with two short-handed goals and a power play tally.

PEEWEE: Taber peewee Oil Kings dropped a 6-4 decision to Lethbridge Hurricanes on the road on Saturday in CAHL play.

Chase Stronge had two goals and Ryan Grey and Tage Jensen had singles.