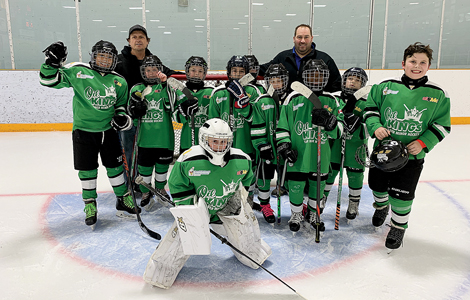 TEAM EFFORT: Taber atom ‘A’ Oil Kings were at a tournament in Strathmore earlier this month. Both atom teams will be featured at the Taber Arena this weekend as the squads host a tournament. TIMES PHOTO SUBMITTED BY CRYSTAL KOIZUMI

ATOM: It was a high-scoring affair on Saturday, as the Taber atom ‘B’ Oil Kings dropped a 14-10 decision to Nanton Palominos on the road on Central Alberta Hockey League play.

Jenner Workman and Burke Hyland had three goals apiece for the Oil Kings.

In atom ‘A’ play, the Oil Kings fell 9-6 to Medicine Hat on the road on Saturday.

Earlier in the month, Taber atom ‘A’ Oil Kings earned silver at a tournament in Strathmore, falling 6-5 in a close final to Airdrie Lightning.

Nixen Miller had a hat trick and Ethan Volk and Nate Kramer had singles.

Both Taber atom teams host a home tournament this weekend for those who want to cheer the teams on.

Friday saw the Oil Kings skate to a 6-6 draw with Picture Butte Blades at the Taber Arena.

The team proceeded to drop a 5-1 decision to Oyen at the Taber Arena on Saturday.