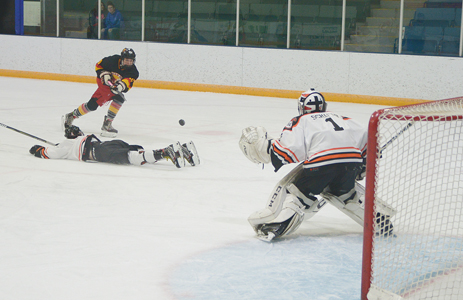 Kahil Wright faced 25 shots on net to earn the win in goal.

The team also hosts the Lethbridge Hurricanes on Sunday at 1 p.m. at the Taber Arena.

PEEWEE: It was second verse, same as the first when it came to South Division powers Taber peewee “AA” Golden Suns (18-3-3) and Wheatland Braves (16-4-2).

The two teams tangled at the Taber Arena on Saturday evening and skated to a 2-2 draw in South Central Alberta Hockey League play.

It was the same 2-2 result as the weekend before at the Taber Arena as well between the two teams.

Colby Gulliver tallied twice for the Suns, with assists from Kayden Yeaman on both goals.

Brylin Noble faced 23 shots on goal to earn the tie.