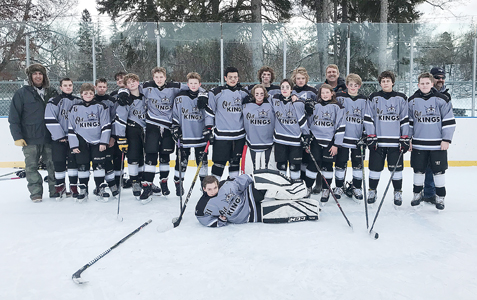 CLASSIC: Taber bantam Oil Kings hockey team got to participate in an outdoor tournament in Kalispell, Mont., and in doing so, had a solid showing, earning bronze with a 3-1 record. TIMES PHOTO SUBMITTED BY CRYSTAL KOIZUMI

Taber bantam Oil Kings hockey team went United States side this past weekend, and finished a solid third in a tournament in Kalispell, dropping only its semifinal game with a 3-1 record in the outdoor-rink venue.

Friday night saw the Oil Kings kick things off with a 6-2 victory over Okotoks.

Kayden Kress and Samuel Tolsma each tallied twice and Brylin Brown and Kellen Lauwen had singles.

Landon Howg and Tristen Egeland-Cusker each had two goals apiece. Kress had a single. Evan Koizumi had two assists.

The Oil Kings’ lone loss was a 4-1 defeat at the hands of the Coaldale Cobras on Saturday afternoon. Carter Jensen scored the lone Oil Kings tally on the power play.

Taber Oil Kings finished off strong with a 3-2 edging of the Lethbridge Hurricanes on Sunday.

Howg scored twice and Kress had a single.

Austin Wheeldon and Chase Plumb shared goaltending duties in the tournament for the Oil Kings.

ATOM: Taber atom ‘A’ Oil Kings managed a 9-1 victory at home over Okotoks on Sunday despite being down Dane DeGraw and Raiden Koizumi from the roster.

Nixen Miller went off for five goals and one assist in the win. Heston Hansen had two goals and two assists. Lincoln Wiebe and Nate Kramer each had a goal and an assist. Delphin DeBoer, Madix Miller, Ethan Volk, and Kellon Schalk each had two assists apiece.

Taber atom ‘B’ Oil Kings dropped both of its Central Alberta Hockey League games over the weekend.

The first was a 10-0 blanking at the hands of Strathmore Storm at the Taber Arena on Saturday.

The team then fell 9-2 to Foothills Flyers on the road on Sunday.

Burke Hyland scored both Oil Kings goals with assists by Jenner Workman on both goals.