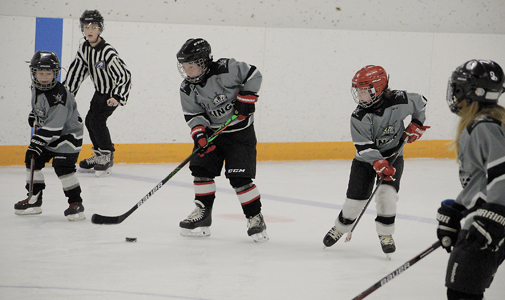 HOLD THE LINE: Aiden Pierzchala of one of the Taber novice Oil Kings teams carries the puck up ice along with a slew of teammates. TIMES PHOTO BY GREG PRICE

Saturday saw the Oil Kings fall 12-8 to Medicine Hat at the Taber Arena.

Wyler Langhofer-Krahn and Chase Stronge both had hat tricks and Ryan Gray and Tage Jensen had singles. Stronge also had two assists.

The team followed up with a 7-3 victory over Coaldale Cobras on the road on Sunday.

The first was a 7-5 victory over Foothills on Saturday morning.

Nixen Miller led the way with two goals and one assist. Delphin DeBoer had one goal and one assist. Cruz Duell, Raiden Koizumi, Lincoln Wiebe and Ethan Volk had singles. Ashton Jensen earned the win in net.

The team proceeded to beat Airdrie 10-7 later in the day.

Miller had five goals and an assist and Wiebe had two goals and two assists. Dane DeGraw and DeBoer each had a goal and three assists.

Duell had a goal and an assist and Ethan Volk had two assists.

Taber atom ‘B’ Oil Kings dropped both of its games, starting off with a 18-3 loss to the Blazers on Saturday at home. Burke Hyland had the hat trick.

Sunday’s slate saw the Oil Kings drop an 11-5 decision to Strathmore Storm at the Taber Arena.