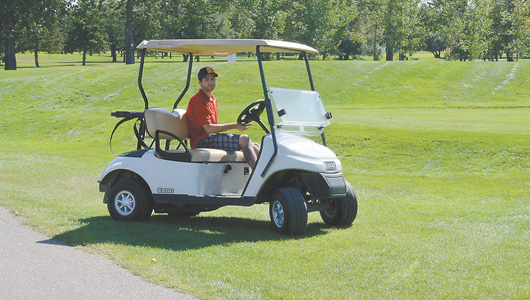 After a request was made earlier this year, town taxpayers will now be footing a $55,000 bill to assist in purchasing two mowers for the Taber Golf Club following a 5-2 split decision by town council.

Administration’s original recommended motion was to approve $36,667 for the Taber Golf Club with funds to be allocated from capital reserves.

“We had some informal feedback from some of council, and we thought we would try this recommended motion going forward, as a third of the cost,” said CAO Cory Armfelt at council’s Nov. 25 meeting. “Of course it’s up to council to make that final decision.”

Coun. Joe Strojwas expressed dissatisfaction with this recommendation from administration, and argued instead for a budgetary shell game to make up the shortfall.

Responding to a question, finance director John Orwa suggested the $110,000 request had been made on the basis of thirds between the town, M.D. of Taber and the club, but this characterization was disputed by Strojwas.

“Just for clarification, when the presentation was made to us, it was made to us on the basis that it would be the M.D. and the town would split that $110,000 at $55,000 apiece. That’s what the presentation was. This third, third and third came from an inside council discussion. But I’m recommending we go back to the original presentation and do the $55,000, and presumably the M.D. would also kick in $55,000 for them, and then it’s clean and gone.”

Clearly less enthusiastic about taxpayers being asked to fork over public funds to a privately-operated golf course, Coun. Mark Garner wanted the club to take some degree of ownership for the equipment.

“Going with a tripartite type of system gives the people at the golf course ownership moving forward, when they need maintenance on these things, they’re invested in it. When we dole out money without them being an active participant in their own equipment, I don’t think that’s wise.”

Strojwas called short-changing the club on their original request a “disservice.”

“I think those people at the golf course board do it gratis, they work on a very tight budget, they put their heart and souls, volunteers help them all the time in maintaining that place. They’ve got a lot of skin in the game out there. They just completed a casino that covered their operating loss for the current year and gave them some cash flow into next year, and I think we would be doing a disservice by doing a three-way split, because it will give them the option of proceeding forward for the next couple years knowing that they’ve got some money to play with.”

Coun. Louie Tams was on board with Strojwas’ argument, but was concerned about the decision that might be made by the town’s sister municipality, the M.D. of Taber.

“I don’t golf…and yet I believe that the golf course is a tremendous recreation facility within the Town of Taber and M.D. of Taber, and I am of the express opinion — along with Councillor Strojwas — that the request was for $55,000. My only concern is if we give them $55,000 and the M.D. doesn’t, they’re still not going to get ahead. I think both have to be agreed that they’re going to get both.”

Strojwas was largely dismissive of this concern, which might entail the golf club seeking an additional $55,000 from the town should the M.D. refuse the club’s split-cost ask.

“I think you have to remember that the M.D. is going through the same thing, and there is talk that they will be allocating the funds. It’s a golf course in the town, when you drive into the town it’s nicely striped, it’s nicely laid out from the west. I don’t think our decision should be contingent on what the M.D. is or isn’t going to do. This will give them a good mower to proceed ahead, and I think we need to endorse that plan for them.”

Following discussion, council voted 5-2 to allocate $37,000 from the Council Discretionary Fund and $18,000 from capital reserves (to make up $55,000) for the purchase of mowers for the Taber Golf Club. Councillors Mark Garner and Garth Bekkering opposed the motion.

In late June after being approached by the club, council approved asphalt repairs to the club’s parking lot with funds allocated from the town’s general operating revenues. Through the resolution, the club contributed $2,000 while the town established a firm ceiling of $8,000 to complete the repairs.