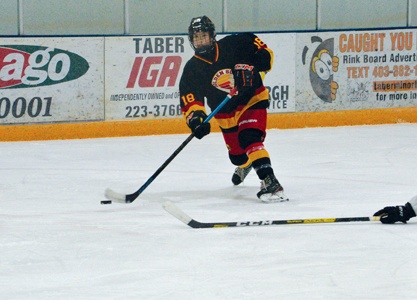 Taber bantam “AA” Golden Suns (3-11-4) had a tough homestand in South Central Alberta Hockey League competition over the weekend, dropping both of its games at the Taber Arena.

Riley Preachuk scored twice and Connor Eldridge had a single.

Kahil Wright faced 41 shots on net in the loss.

Taber bantam “AA” Golden Suns are on the road this weekend with games against Olds Grizzlys on Saturday and Central Alberta Selects on Sunday.

The Golden Suns were blanked 4-0 by Wheatland Chiefs (11-2-2) on Saturday night.

Blake Vaselenak faced 29 shots on goal in the loss.

The midget Golden Suns managed to bounce back with a 4-2 doubling of Lethbridge Hurricanes (5-5-2).

Taber midget “AA” Golden Suns are on the road on Sunday against NWCAA Bruins.

Cason Van Hal faced 17 shots on net in the win.

Planger and Rhett Serfas had two assists each.

Brylin Noble faced 17 shots on net to earn the win in goal.