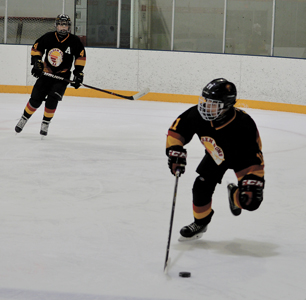 SUN SPOT: Cage Smith of the Taber peewee “AA” Golden Suns carries the puck out of his own zone in a 3-2 win over Central Alberta Selects on Nov. 9 at the Taber Arena. TIMES PHOTO BY GREG PRICE

James tallied twice and Wyatt Broderson had a single. DeBoer had two assists.

Taber midget “AA” Golden Suns are on the road against CNHA Canucks on Saturday afternoon.

Connor Chapman and Brady Magarrell tallied for the Suns.

Taber bantam “AA” Golden Suns return to SCAHL play on Nov. 30 with a game against West Central Tigers at the Taber Arena at 5:30 p.m. The Suns also host Wheatland Warriors the same weekend on Dec. 1 at 1 p.m.