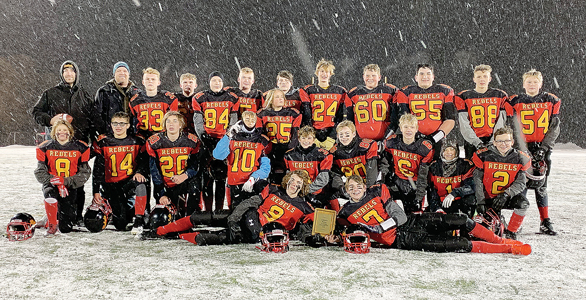 WINTER WONDERLAND: Taber bantam Rebels football team were able to finish off its perfect undefeated season in nine-man football by winning provincials in Lacombe over the weekend. TIMES PHOTO SUBMITTED BY JAMIE O’CONNOR

Taber bantam Rebels football team capped off its undefeated regular season by proving to be a provincial powerhouse, blanking Sherwood Park Wolverines 46-0 in the first ever Nine-man Football provincial championship held in Lacombe.

“This past week of practice was some of the best I’ve seen all season despite the frigid temperatures, so it left the coaching staff with a very confident feeling heading into the weekend. I also feel last weekend’s narrow victory in the league championship perked the team up. They realized the effort that was going to be needed going forward into our final game of the season,” said head coach Jamie O’Connor.

The Rebels would begin on defence where they have been dominant most of the year, as they forced the Wolverines to go on a quick three-and-out series.

“They had a runningback that scored 45 touchdowns this season, so we knew they had a threat that could run off a big play at any time, so our group was focused on shutting him down right from the start,” said O’Connor.

Offensively, the Rebels would start with a first-play toss to Evan Rabusic who would break to the outside and score his first of three majors on the day to put the Rebels up 6-0.

“Evan was in the zone, and I could tell that right from the moment he walked into the dressing room. He knew he had an off game last week and he was going to make up for it in a huge way. This was the best I’d seen him run all season, and he wasn’t going to let anybody stop him,” said O’Connor.

The Rebels would go into the half leading 18-0, and despite the strong play both ways, the coaches wanted to make sure they all stayed in the mentality that this game was far from over.

“We went in and told the group that we just needed to keep the pressure on and to remind them that one week ago, we were the team that was in this exact same situation, so the foot needed to stay on the accelerator,” said O’Connor.

The Rebels would get the ball to start the second half and quarterback Brennan Abela was able to call his own number and take off on a 45-yard run to the endzone to seemingly take the wind out of the sails of the Wolverines.

“Brennan had a great game, he was able to stand in the pocket and make things happen, while also being able to run around and find open receivers throughout the game. He was also able to surprise the Wolverines by kicking the ball deep on both kickoffs and punts, and that allowed the coverages to pin them deep on almost every possession,” said O’Connor.

The Rebels would continue to dominate on defence and choke out any chance of the Wolverines gaining any momentum to try and start a comeback.

The Rebels were lead by Defensive Player of the Year Kayden Wright and defensive back Brigham Porter who shared the team lead in tackles on the day.

Allen Clements and Tyson Harker were also key in stopping any positive yardage put forth by the Wolverines. Logan Porter came up clutch with a fumble recovery deep in Wolverine territory.

The Rebels would throw a quick pass from Abela to Elias Cooper in the end zone to put the Rebels ahead 38-0 late in the third quarter. Cooper had two touchdowns on the day.

Brigham Porter would finish off the scoring for the Rebels, as he was able to haul in a 80-yard catch and run from quarterback Cody Heide.

“Those two have some kind of connection, we’ve dubbed it the Brigs Special as he and Cody have connected five times on this play. We are excited to see how they can work together next season as they will both be returning to the bantam program,” said O’Connor.

However O’Connor didn’t want to look past how special the season truly was.

“They challenged each other every day and the friendships that were created this year was something quite special to watch as the season went along. We had some key new additions that slotted into spots that worked out very well, and we were able to instill a belief that we had some unfinished business from last season,” said O’Connor. “These kids were able to show us how bad they wanted victory and they have earned every right to be called provincial champions. I couldn’t be more proud of each and every individual on this football team and the heart they showed this season. They’ve been able to do something that most teams dream about every year, and I know that they will share the memories of this past season forever.”

The Rebels finished off the season with a perfect 9-0 record on the season and outscored their opposition 362-64.