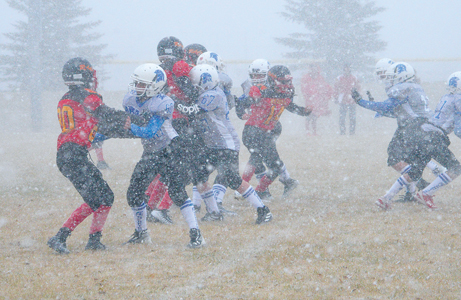 Taber bantam Rebels football team are off to the league championship in nine-man football after dispatching the Coaldale Spartans 58-24 during some trying weather conditions at Ken McDonald Memorial Sports Park on Saturday.

“I couldn’t be more proud of how the team was able to respond to the challenging wind and weather conditions throughout the game. There was no let up in effort and the team responded with another strong second-half finish,” said Jamie O’Connor, head coach of the Taber bantam Rebels football team.

Quarterback Brennan Abela scrambled for 170 yards and was six-for-10 passing for another 80 yards.

Besides four extra points, the rest of the scoring came on Rebels forcing safeties.

Defensively, the Rebels were led by Allen Clements with five tackles.

Brigham Porter, Kayden Wright both had four tackles apiece, with each player forcing a safety in the Spartans’ end zone.

Taber bantam Rebels square off against Lethbridge Junior Coyotes in the Nine-Man championship on Saturday at 11 a.m. in Raymond at Victoria Park.

“Last year we came up just short of our goal of winning a league championship and the boys that returned knew that we have some unfinished business to take care of, and they’ve lead this team to another chance,” said O’Connor. “This time we hope to achieve our goal and leave Raymond as champions.”