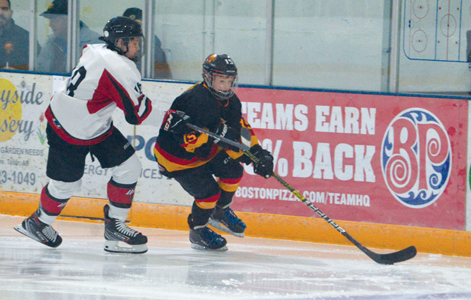 The Taber peewee “AA” Golden Suns came out hot this weekend on the road as they collected two wins.

On Saturday night, they faced off again Medicine Hat Orange and walked away with a 6-0 shutout victory.

Brylin Noble was in the blue crease and stopped all 24 shots he faced.

The peewee Golden Suns second game was another drubbing, this time of the Okotoks Oilers Black with a final score of 9-1.

The peewee Suns are currently atop the South Conference with a record of 6-1-0, good for 12 points.

Next up, the team will be back on home ice when they face the Olds Grizzly this Saturday afternoon with puck drop at 3 p.m. and then the Foothills Bisons visit on Sunday with game time at 10:30 a.m.

BANTAM: The Taber bantam “AA” Golden Suns’ troubles continued this weekend as the team is still searching for their first win of the regular season.

On Friday night, the bantam squad was in Cranbrook where they lost a close one 4-2.

Riley Preachuk and Rhett Klemen found the back of the net with assists coming from Easton Mehlen and Connor Chapman, and Chance Loke.

Keegan Stenger stopped 26 of the 30 shots he faced.

The Golden Suns faced off again against Cranbrook on Saturday night where they were once again bested by a score of 4-1.

Chapman scored the lone goal with Preachuk and Heath Hansen providing the assists.

Kahil Wright was in net and stopped 30 of the 34 shots fired his way.

The bantam Golden Suns have a record of 0-5-2-2 to start the season.

The team will have another chance to break the goose egg this coming weekend when they hit home ice to face the Foothills Bisons Friday night at 8:30 p.m. and the Olds Grizzlys on Sunday afternoon with puck drop at 1 p.m.

MIDGET: Taber midget “AA” Golden Suns played one game this weekend against the West Central Tigers and were defeated with a final score of 5-4.

Cody Stange had himself a game as he posted a hat trick while the other goal came from Jayden Kostiuk.

Assists came from Tristan Miller with two while Wyatt Broderson, Brylan Span and Quade Hughson each had one.

Aidan Low provided the backstop where he faced 40 shots compared to his counterpart who only had 26.

The midget Golden Suns have started the season off slow with a record of 1-3-0-2 but have a chance to change their fortunes this weekend.

They visit the Lethbridge Hurricanes on Sunday afternoon.