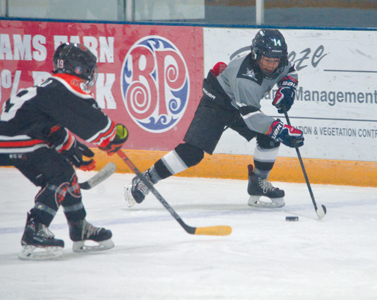 BIG WEEKEND: Atom Oil King Nixen Miller had himself a pair of great games this weekend as he racked up nine points in two games including a seven goal effort on home ice Saturday afternoon against Medicine Hat. TIMES PHOTO BY COLE PARKINSON

The Taber Atom Oil Kings were in action this weekend and skated to back-to-back draws.

On Saturday afternoon at the Taber Arena, the Oil Kings played against Medicine Hat, which resulted in a 7-7 tie.

Nixen Miller had the hot stick and scored all seven goals for the team.

Ashton Jensen stopped 20 of the 27 shots he faced in the contest.

Sunday saw the team travel to Okotoks in which a similar result happened as the team came away with a 5-5 tie.

DeBoer put in two goals while Nixen Miller, Hansen and Wiebe rounded out the scoring.

Kramer and Nixen Miller also provided an assist each.

Jensen was busy as he made 41 stops over 46 shots.

PEEWEE: The Taber peewee Oil Kings had two games this weekend but no game sheets were available at press time.

BANTAM: Taber bantam Oil Kings were blanked 10-0 in their first game of the weekend when Lethbridge White visited.

Goaltenders Chase Plumb and Austin Wheeldon were busy in the contest as they faced 15 and 21 shots respectively.

The team would find the scoresheet in their Sunday contest against Lethbridge Red but would still fall 7-3.

Kellen Lauwen would pot two goals while Evan Koizumi would score the other.

Wheeldon and Plumb both played once again, stopping 24 and 10 shots, respectively.

MIDGET: The midget Oil Kings also had two games this past weekend.

The first was a home contest that saw Redcliff best the Oil Kings 12-4.

Cole McClelland notched three points (two goals and an assist), while Byron Kress and Brayden Kaye each found the back of the net.

Kole Reynolds, Logan Kromm and Michael Stronge also had helpers in the game.

Levi and Blake Van Beers each got into the game which saw Blake notch 70 saves over 80 shots. The second game for the midget Oil Kings was another high scoring affair that saw the home team fall 12-8.

Kress picked up five points with four goals and one assist while Stronge also had a strong game with four points, one goal and three assists.

Logan Howg hit the back of the net two times while Reynolds had a goal and an assist and McClelland rounded out the scoring with two helpers.