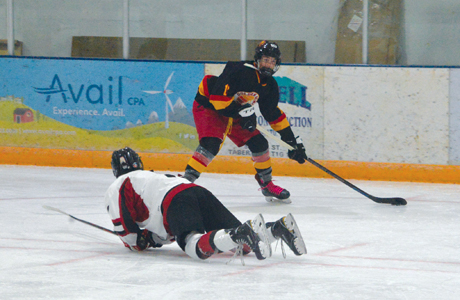 BLOCK ATTEMPT: Bantam Golden Sun Connor Chapman streaks in off the wing during a home game this Sunday. TIMES PHOTO BY COLE PARKINSON

Taber bantam “AA” Golden Suns (0-3-2) are still searching for the first win of its young SCAHL season, with a loss and a tie over the weekend.

Brady Magarrell and Chance Loke scored for the Suns.

Keegan Stenger faced 27 shots on goal in the loss.

Sundays home game at the Taber Arena earned the Golden Suns a point in the standings with a 4-4 draw with Airdrie Lightning (2-1-2), as Taber mounted a furious four-goal comeback, with three occurring in the third period.

Kahil Wright kept the Golden Suns in the game with a busy game, facing 41 shots on goal to preserve the tie.
Taber bantam “AA” Golden Suns are on the road this weekend with a two-game set against Cranbrook Hornets on Friday and Saturday.

PEEWEE: Taber peewee “AA” Golden Suns swept its home-and-home series with Okotoks Oilers Green (0-4-0) this past weekend to improve its record to 4-1 on the young season.

Saturday’s tilt was a 7-4 victory on the road.

Cason Van Hal earned the win in net for the Suns, facing 27 shots on goal.

The team returned home on Sunday and delivered a 5-1 victory over the Oilers at the Taber Arena.

Scoring was spread out, with Gulliver, Yeaman, Smith, Jett Matisho and Kobe Urasaki tallying for the Suns. Rhett Serfas had two assists.

Brylin Noble stopped 34 of 35 shots to earn the win in net.

Taber peewee “AA” Golden Suns are on the road this weekend with games against Medicine Hat Orange and Okotoks Oilers Black on Saturday and Sunday respectively.

MIDGET: Taber midget “AA” Golden Suns (1-2-0) earned a split over the weekend with two games at the Taber Arena.

Aidan Low earned the win in goal for the Golden Suns, facing 31 shots on net.

The Golden Suns proceeded to be shutout by Medicine Hat Hounds (2-0-0) 8-0 on Sunday afternoon.

Blake Vaselenak and Low faced a combined 42 shots on goal in the loss.