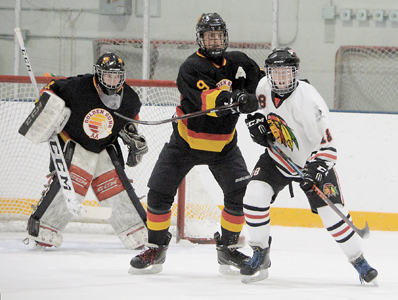 OFF LIMITS: Taber midget “AA” Golden Suns defenseman Quade Hughson tries to clear the front of the net on the penalty kill, to give goaltender Blake Vaselenak a cleaner look for a possible save against the Wheatland Chiefs at the Taber Arena on Friday night. TIMES PHOTO BY GREG PRICE

Taber midget “AA” Golden Suns started off its 2019/2020 South Central Alberta Hockey League season with a tight 2-1 loss to the Wheatland Chiefs at the Taber Arena on Friday night.

Carter DeBoer scored the lone Suns tally with an assist by Quade Hughson.

Blake Vaselenak was solid in net for the Golden Suns, registering two periods of shutout hockey on the way to stopping 24 of 26 shots in the loss.

Taber midget “AA” Golden Suns have a two-game homestand this weekend, starting off with a Friday tilt against the Okotoks Oilers at 8:30 p.m. at the Taber Arena.

The team then hosts Medicine Hat Hounds on Sunday at 3:30 p.m. at the Taber Arena.

Kahil Wright earned the tie in net by stopping 28 of 31 shots on goal.

Taber bantam “AA” Golden Suns are on the road on Saturday with a game against the Okotoks Oilers before returning home on Sunday with a 1 p.m. contest against Airdrie Lightning at the Taber Arena.

The scoring was all spread out for the Suns, who got singles from Cage Smith, Jarret McNeill, Jett Matisho, Kayden Yeaman, Braxton Hanna and Jager Gugyelka. Yeaman, Colby Gulliver and Barrett Van Nistelrooy each had two assists apiece.

Brylin Noble had a quiet night in net, facing a total of 13 shots on goal for the win.

Taber peewee “AA” Golden Suns have a home-and-home series this weekend with Okotoks Oilers Green, as the squad hits the road on Saturday before returning home on Sunday to host Oilers Green at 10:30 a.m. at the Taber Arena.