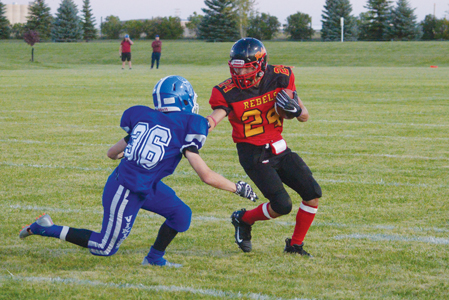 W.R. Myers Rebels football team got into the win column with a dominating 41-7 victory over the Pincher Creek Mustangs on the road on Friday.

“It feels good to get that first win under our belts, and even better, since it was a league game. We’d been telling the boys all week that Pincher was going to bring it to us, so we needed to come out strong, and set the tone early,” said Jason Jensen, head coach of the W.R. Myers Rebels football team.

The Rebels took the advice to heart, as with three plays in, W.R. Myers took a 7-0 lead thanks to slotback Quinn Bailey finding the endzone, less than a minute into the game.

Bailey’s heroics continued on the ensuing defensive series, as he intercepted a Mustangs pass near midfield, and two plays later, receiver Aiden O’Connor scored to put the Rebels up 14-0. The first quarter dominance continued, with fullback Shawn Harris getting in on a short run, to put us up 21-0 before the first quarter was complete.

“The Mustangs really settled in well in the second quarter, and started to take it to us. They made some great defensive plays, and managed to drive on us on a few occasions,” said Jensen, adding a long-pass and catch had the Mustangs pull it to 21-7.

But any hopes of a Mustangs comeback were quickly dashed with Quinn Bailey striking paydirt again before the half. Despite a 20-point half-time lead, Jensen stressed the Rebels were not resting on its laurels.

“At half-time, we challenged our players to tighten things up, as penalties and small mistakes had been starting to creep into our game in the second quarter. I can proudly say that those boys answered the challenge,” said Jensen.

O’Connor and running back Randy Martens added touchdowns for the Rebels who managed to hold out a determined Mustangs team out of the endzone on multiple occasions in the second half.

“I have to say, I’m really proud of how our team performed, in all three facets of the game. It’s good for these boys to get that first taste of a win, and I think we’ve gotten things turned around just at the right time, as we head into the meat of our schedule,” said Jensen, adding next up is defending Tier IV provincial champion Canmore Wolverines. “That’s the team that ended our season last year, and all of our boys are hungry for revenge. I expect it to be a tough test, but I believe we have what it takes to knock them off.”

It will be a big day of football this weekend as part of Football Day in Taber. The Taber bantam football team battles Lethbridge Coyotes on Saturday at 11 a.m. with the high school Myers team to follow against the Wolverines at 2 p.m. at Ken McDonald Memorial Sports Park.