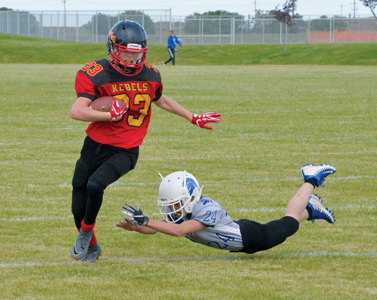 TIPTOE TO THE ENDZONE: Rebel Elias Cooper dances around a sprawling Coaldale defender enroute to a touchdown during the bantam Rebels’ beatdown of the Spartans at Ken McDonald. TIMES PHOTO BY COLE PARKINSON

Defence was the name of the game for the Taber bantam Rebels as it pushed its record to 2-0 with a 42-0 shutout of Coaldale Spartans at Ken McDonald Memorial Sports Park on Saturday afternoon.

Kayden Wright and Elias Cooper each returned interceptions for touchdowns, with Thatcher Hughes and Allen Clements also picking off the Coaldale quarterback.

“Our defence gave up nothing, and we won the turnover battle by a large margin. Having those two interceptions returned for scores took some pressure off the offence for sure,” said Jamie O’Connor, head coach of the Taber bantam Rebels football team.

Linebacker Clements was flying all over the field, leading the team with 10 tackles.

“Clements has been a huge contributor to the defence this year already and I expect him to get better as the season rolls along,” sad O’Connor.

Cody Heide, Xavier Hull and Elias Cooper each ran in scores on the ground, with Copper getting the hat trick of majors, with a 15-yard TD reception to round out the scoring for the Rebels.

“Cooper had himself an outstanding game, contributing on both sides of the ball,” said O’Connor.

Coach O’Connor has liked how the team has gelled to date, where right down the roster, each player has had their moments.

“These boys know the work they need to put in every day as the competition will only continue to get better as the weeks go on,” said O’Connor.

The team then has a short turnaround in hosting Raymond Comets on Tuesday, Sept. 24 at Ken McDonald Memorial Sports Park at 6:30 p.m.