Versteeg hoping to latch on with Blackhawks 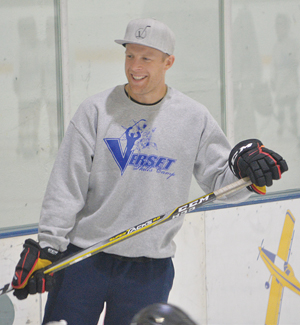 ICE SMILE: Kris Versteeg flashes a big smile as he checks in on some players during last week’s Verset Skills Camp at the Taber Arena. TIMES PHOTO BY COLE PARKINSON

Kris Versteeg is heading back to his NHL organization home after signing an AHL deal earlier in the offseason.

After completing his season last year with Växjö Lakers HC of the Sweden Hockey League, the 32-year-old forward decided to come back to North America to sign with the Rockford Ice Dogs, the Chicago Blackhawks AHL affiliate.

“I knew the Blackhawks and the situation they were in. It was a good situation for me to continue to play hockey,” explained Versteeg in an interview with the Times during a break at this year’s Verset Skills Camp in Taber.

Last year, Versteeg took the trek to Russia to play in the Kontinental Hockey League with Avangard Omsk where he collected three goals and two assists in 12 games.

Midway throughout the campaign, Versteeg elected to sign for the remainder of the season with Växjö Lakers where he put up four goals and seven assists in 12 games.

The Lakers would go on to the SHL playoffs before being eliminated in the quarterfinals 4-1.

“It was a good experience. Sweden was a really good experience and I had a lot of fun. It is a different life but Sweden is as close to Canada as you can get from a European experience,” continued Versteeg.

Now with a one-year AHL deal in place, Versteeg is hoping to prove himself to gain an NHL contract to get up with the big club.

In 643 NHL games with Chicago, Toronto, Philadelphia, Florida, Carolina, Los Angeles and Calgary, the forward has collected 149 goals and 209 assists, good for 258 points.

In his last NHL stint with the Flames, Versteeg had an injury-riddled season where he only saw 24 games before hip surgery forced him out of the lineup.

Now, back at 100 per cent, Versteeg has been in the gym preparing for the next NHL season with training camp a few weeks away.

“I’ve just been training and getting ready for the upcoming season,” he said.

Blackhawks training camp gets underway in Chicago on Sept. 14.