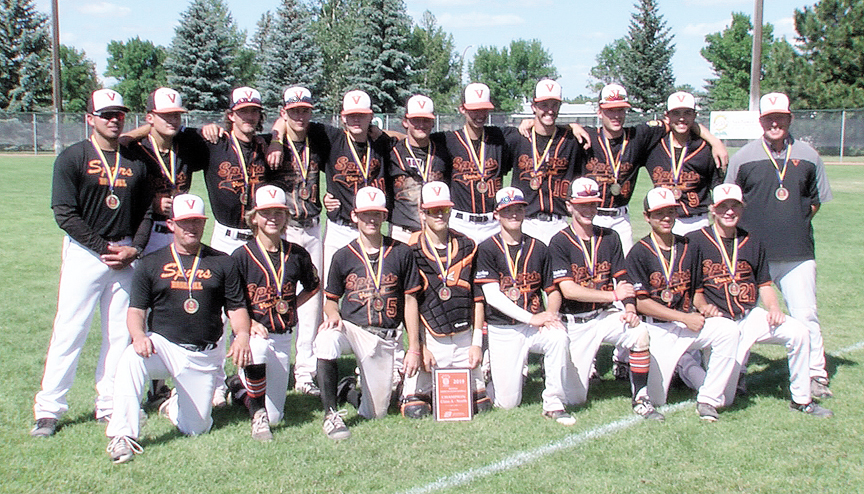 TOP TEAM: Vauxhall Spurs were able to bounce back from its earlier loss against Lewistown Redbirds at districts in Medicine Hat over the weekend to turn the tables on the same team in the championship to earn the district title. TIMES PHOTO SUBMITTED BY KIM HOWG

Vauxhall Spurs went into the north district baseball tournament in Medicine Hat this past week as the top seed and lived up to their billing, coming away as district champs.

The Spurs were able to avenge an earlier loss to the Lewistown Redbirds by beating them in the championship final 10-4 on Sunday, thanks to having lots of pitching left if it needed to be called upon.

“We elected to go with Adam Vulcano to start off. He had thrown two innings in relief earlier against Lewistown, but I elected to go with him because he’s probably one of the best guys we got at holding the running game. Lewistown does a lot of running,” said Dru Sebastian, head coach of the Vauxhall Spurs. “He helped stabilize the game early and gave our bats a chance. Hayden Mack came on with two on in the third and got a double-play ball on his third pitch and got us out of the inning. He threw strikes and got us through the fifth inning.”

The score was still tight at 3-1 going into the fifth inning with the Spurs trailing, but three in the fifth, two in the sixth and four in the seventh inning allowed Vauxhall to run away with it as the bats got hot.

“I was still a little worried knowing how we sort of imploded against Lewistown earlier and seeing how our 18 years olds would respond and maybe go ‘oh, here we go again’,” said Sebastian. “But our 18-year olds really led the pack all day on Sunday. There were all good with the bats. Grady Honess in the eight hole had a big two-RBI double that got us going in the championship game. Hayden Mack and Grady Honess had back-to-back bunt singles that gave us a four-run second inning against Lethbridge in the morning game and came back and played outstanding defence. Kole Fujita caught two great games behind the plate and hit well over .500 on the weekend. Older guys led the charge. I commend them on their fortitude and putting their foot down and playing their best baseball on the most important day of the year for us.”

After receiving a bye as the top seed and only seven teams in the tournament, the Spurs set the table with authority with a 12-2 win that was called early over Havre Northstars.
“Our bye enabled us to throw Brady Howg, our most consistent starting pitcher in Game 1 because if we won that one, we’d only needed to win one of the next two to get a State bid. Brady threw great. He got into a little bit of trouble in the second inning, but other than that, he threw a clean game. I thought our team matched up really well against Havre going into it,” said Sebastian. “The guy they threw we saw a week prior and our hitters jumped out early and knew everything he had. We had our three all-district guys at the top of the order in Dallas Cummins, Johnny Vulcano and Carson Becker and they got the momentum early for us.”

The Spurs lone loss at the district tournament came in extra innings, as the Spurs dropped an 8-3 decision to the Redbirds in eight innings, surrendering five runs in the final frame.

“Lewistown is a great team that is really well-coached. We have a dog fight with them every time. It was a back-and-forth affair with two-out singles on both sides to score some runs. We had the heart of the lineup up in the seventh inning and they did a great job getting out of it with a zero in the bottom of the seventh,” said Sebastian.
“Went to the eighth and we just imploded. We had troubles finding the strike zone and I think Lewistown scored one of their five runs on a hit. It was a self-implosion at the end of the game. The first team to make the first mistake was the one that was going to lose. Lewistown won the war of attrition on us.”

The Spurs bounced back nicely in its last game before the championship, in a dominating performance and pitching gem in a 9-0 blanking of Lethbridge Miners that was aided by some top-notch defence.

Aaron Vulcano returned from a lengthy absence of illness from strep throat to toss a complete game.

“Our strength all year that has put us above most teams is our outfield play and our speed. Carson Becker and Dallas Cummins made several great catches with two outs that could have been some big extra-base hits for Lethbridge that we took away,” said Sebastian. “We gave the ball to Aaron Vulcano who hadn’t thrown in two weeks because of sickness and he threw a complete-game shutout on about 80 pitches. That was big for us, because we weren’t really planning on him going past 80 or 90 pitches because of his layoff.”

The district championship now has the Spurs competing at State which starts this weekend in Florence, Montana, just outside of Missoula in a field that looks like it is there for the taking.

Sebastian is unsure how the Spurs will match up against other districts in American Legion ‘A’ ball, but knows they will at least have a fighting chance given how the results of other district tournaments panned out.

“From my understanding, the State tournament is going to be kind of wide open. There were a couple of one seeds that got upset at districts and the host team who automatically makes it was an eight seed in their division,” said Sebastian. “We have a competitive team and we’ve been playing defence at a high level, especially on Sunday.”

As many of the successes the Spurs have enjoyed this year, Sebastian was quick to tip the hat of high school baseball coaching staffs in the region, along with the Vauxhall Academy of Baseball and Spurs coaches past in helping players be battle-ready for the summer American Legion ‘A’ season.

“Ronnie Deck two years ago did a great job coaching these guys up. Les McTavish at the academy has worked with several of these guys throughout the year, and then there is the local high school coaches,” said Sebastian. “Those are the guys who deserve more credit than me for our successes this summer, just because we just come for two short months where we are fine tuning things. I have a lot of gratitude for those guys for the work they put in.”