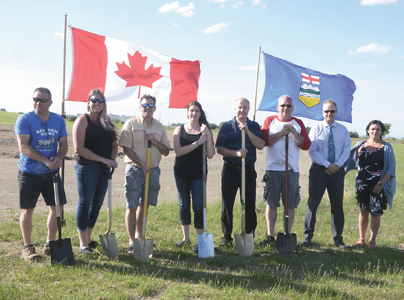 With a partnership now established with another legal entity, the Town of Taber has finally signed off on the Baseball – Softball Enhancement Society’s project to complete a fourth ball diamond at Ken MacDonald Memorial Sports Park.

“Basically the Baseball – Softball Enhancement Society has now partnered with Kinsmen (Club of Taber) to undertake the completion of that project,” said Mayor Andrew Prokop. “So the funds will now be released for that purpose with some basic guidelines to follow comparable to the other ball diamonds on site.”

Following closed session discussion at the May 27 meeting, council voted unanimously to direct administration to enter into a construction license agreement with the Kinsmen Club of Taber to grant fund a fourth ball diamond at the Ken MacDonald Memorial Sports Complex, and to “mirror the existing west diamond” at KMMSP.

In a separate follow-up motion, council voted unanimously to direct administration to grant funds of $150,000 to the Kinsmen Club of Taber for completion of the project.

“The Kinsmen Club stepped in as a society to assist the softball – baseball group in order for us to have an agreement with them,” said CAO Cory Armfelt. “There has to be a legal agreement in place, ultimately for our audit trail, in order to track the $150,000 that we have an agreement for the construction of a baseball diamond for, and the Kinsmen were willing to step in and facilitate that agreement to get the baseball diamond constructed, and we’re very happy that we can have a relationship with them and get these diamonds done.”

Prokop suggested one of the main sticking points that had earlier created friction between the baseball society and the municipality was a lack of official society status for the organization.