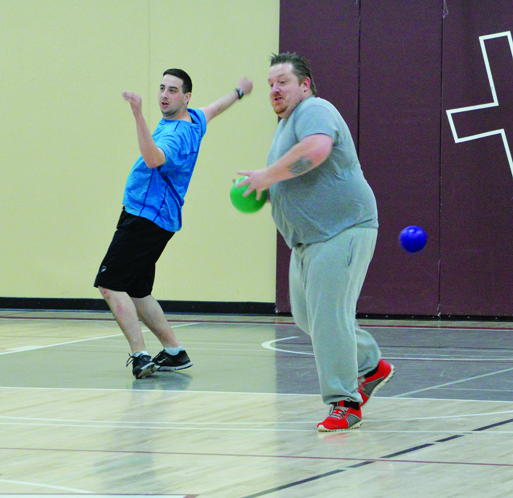 GETTING OUT OF DODGE: Sean Evans (right) winds up to fire a dodgeball during one of Taber Dodgeball’s games at Taber Christian School. The group plays every Wednesday for two hours from 7-9 p.m. at the TCS gym and are looking for more players. TIMES PHOTO BY COLE PARKINSON

While training does not need to be that intense or dangerous like found in the cult classic film Dodgeball, local enthusiasts are hoping to attract more people to a league that meets once a week at Taber Christian School.

Numbers for dodgeball games in Taber have ranged from single digits to high teens, where Sean Evans, co-organizer of the league along with Billie Johnson, says there is always room for more.
Taber Christian School is rented for two hours, where competitors are charged $5 each.

“We are not in this to make money, we just want to cover our costs of the gym and we did buy eight balls. If it gets more popular, we will look at lowering the fee or if people are comfortable paying that, and we have money left over, maybe look into giving it to charity,” said Evans of the league that is for people 18 and above for now. “We’re just in it to have fun.”

While times may vary, for the most part, the dodgeball league goes from 7-9 p.m. every Wednesday at Taber Christian School.

There was no league last week due to gym availability, but will resume again this week, as people are encouraged to check it out today.

Two teams play, lining up on opposite ends of the gym where members have to be touching the wall.

Teams take off at the same time to their group of balls in the corner on the middle line, where players active the ball by stepping back behind the initial no-fly zone before throwing the balls at opponents.

A hit only counts if a ball strikes an opponent in the air and off of no deflection like off the ground or a wall.

“They can deflect a ball with a ball in their hand, it doesn’t count as a hit. As long as the ball doesn’t hit a body part,” said Evans. “If you catch a ball in the air, one of your teammates comes back into the game and the person throwing it is eliminated.”

For now, Wednesday dodgeball is just looking for more players. But if it proves popular enough, dreams could be of an official league with multiple games going at once, or where kids under 18 are allowed.

“We are just trying to gain interest. Maybe down the line, we change some rules and invent new games that people find enjoyable,” said Evans. “But for now, we want to give people another option to get some exercise and have some fun with friends.”

The group has its own Facebook Page (Taber Dodgeball) which currently has 42 members which Evans encourages people to join to get updates on the initiative.

Waivers are signed to play in the league, but Evans cautions, these are not your dodgeball games of old, with the hard-cover plastic balls of the 80s and 90s, often the nightmare of picked-on kids in their respective gym class.

“You are more startled than anything when it hits you. They have a foam on the inside, with the skin on the outside. It doesn’t hurt as much as it used to,” said Evans. “It startles you more than anything, it makes a good popping noise. We’ve been playing for weeks and we’ve had zero injuries and zero fights. Everyone just enjoys coming out and playing some dodgeball.”