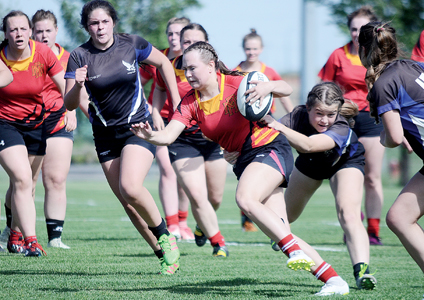 It was heartbreak for the W.R. Myers Rebels varsity girls rugby team, who saw its provincial title slip away on literally the last play of the game, with the Vulcan Hawks scoring a deciding try in Lethbridge.

“It was a tooth-and-nail fight against the Vulcan Hawks. The game was tied going into the final play when the Hawks scored, stealing the game and the title away. It was a hard-fought battle between the two sides, and Vulcan came out deserving champions,” said Adam Hughes, co-coach of the W.R. Myers Rebels varsity girls rugby team.

It was much the same against the Banff Bears in the semifinal, with the Bears taking the lead early, but the Rebels rebounding to win comfortably 34-12. It was those same Vulcan Hawks that the Rebels had won their fourth south Zone title against prior to provincials.

“That was a great way to prepare for the provincial tournament,” said Hughes, adding, after the zone tournament, league all-stars were announced. Alex Haller, Andrea Harvey, Dani Wright, Annika Steed and Vicky Shimbashi were all named league all-stars.