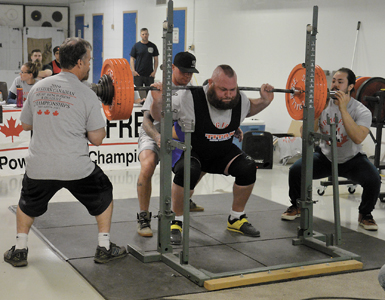 POWER PERSONIFIED: John Koethler (pictured) broke Canadian records in all three of his events at the Drug Free Western Canadian Championships in Taber on Saturday. TIMES PHOTO BY GREG PRICE

Lots of locals made their presence felt at the Drug Free Western Canadian Championships in Taber in powerlifting over the weekend.

“There were some very strong men and women who competed in this contest There was a total of 20 Canadian powerlifting records broken, with many personal bests set also. Clay Sparks and John Koethler both had very strong lifting performances, setting multiple Canadian records, lifting some very impressive poundages,” said Randy Sparks, an organizer of the event. “We have a very experienced crew of volunteers who help make things run so smooth. A big thanks to all of the volunteers who judged, spotted, worked the scorers table and helped set up and take down.”

John Koethler also registered a trio of Canadian records in his first-place finish for the open men, 319-pound plus class. He squatted 590 pounds, bench pressed 350 pounds and deadlifted 625 pounds.

Randy Sparks earned first overall in his Masters 60-64 years old 242-pound class. He registered Canadian records of 520 pounds in the squat and 475 pounds in the deadlift, while bench pressing 205 pounds.

Locals will be competing in a bench press and deadlift competition in the fall.