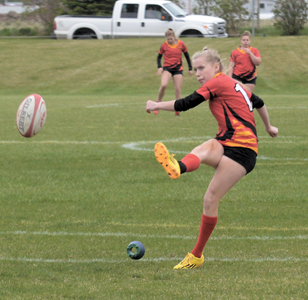 W.R. Myers Rebels rugby program had a week to remember, as it piled up Ws against some battle-tested opponents.

In league play last week, the varsity Rebels gutted through an 38-31 victory over Vulcan at Ken McDonald Memorial Sports Park.

“It was a tight game and an important game. Vulcan was a tough opponent and are favoured to be the Rebels’ opponent in the zone final,” said Adam Hughes, co-coach of the W.R. Myers Rebels varsity girls rugby team.

With the win, the Rebels clinched first place in the Tier III standing and earned a bye to the zone final on June 3 in Lethbridge.

The junior varsity Rebels finished its season on a high note dover the weekend, sweeping its opposition in a tournament in Fort Macleod. The team’s wins included victories over Winston Churchill, Fort macleod and Raymond.

“This is a fantastic result, and one that shows that the rugby program’s future is in great shape.”