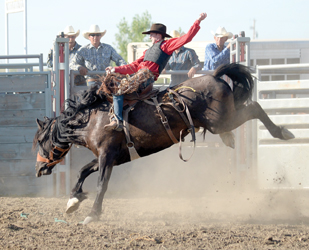 Details have been scanty from the Town of Taber about what might have factored into the November 2018 decision to terminate the Taber Pro Rodeo Association’s lease agreement for property west of Highway 864.

Following closed session discussion on Nov. 26, town council had passed a motion to issue a notice of termination to the association for their lease agreement (dated Nov. 13, 2012) effective immediately. On Jan. 28, 2019 council had voted to extend the removal of the association’s chattels (property other than real estate) to March 31. According to the minutes the latter vote was not unanimous.

Responding to a media inquiry at council’s April 8 meeting, Deputy Mayor Carly Firth was unwilling to provide any further information about council’s original decision to terminate the association’s lease and order the removal of its chattels from the property.

“Most of that discussion was in closed session due to it being a contractual matter, unless anybody would like to speak personally about their feelings on it,” said Firth.

Prior to adopting the agenda for the April 8 meeting and to allow for the pro rodeo association’s delegation to request a further extension, council was forced to conduct some procedural housekeeping. As a request for a further extension had been previously discussed by council within the past six months, this required council to abrogate a condition of their Procedural Bylaw by a two thirds majority recorded vote in order to add the association’s request to the meeting agenda for in camera discussion. Councillors Jack Brewin and Joe Strojwas opposed the motion.

After back to back years without their flagship event, the pro rodeo association is hoping to get back on the horse but it remains unclear if this is a possibility for the organization in 2019.

“We’re still planning on going ahead with the rodeo. We’re working on some stuff right now, there has been no real decisions made yet on what is happening but we are planning on going ahead,” said pro rodeo association president Barry Jensen at the M.D. of Taber council’s March 27 meeting. “We have got support from the CPRA (Canadian Pro Rodeo Association) to do it if we want to do it.”

Jensen was seeking M.D. council’s assistance in covering the $1,970 cost of insurance for the event, but was questioned by councillors about potential locations now that the town has terminated the association’s lease.

Without a leased location firmly in place for the organization, some members of M.D. council were uncomfortable with approving funds to cover their insurance.

“My understanding of this is, this is for the requirement of the lease they no longer have. I think we should get clarification from the town whether they have a lease there or not. We can’t give them insurance for something that they aren’t able to insure,” said Coun. John Turcato.

Others on M.D. council thought the situation wasn’t quite as clear.

“This may be a chicken or an egg. I don’t think they can get a lease if they haven’t got the insurance and can’t get insurance (without the lease). Maybe a motion stating in the event that they get the lease, we would pay the insurance,” said Coun. Brian Brewin.

A motion was made stating the M.D. would pay for insurance in the event the association were able to secure a lease, which was carried 6-1. Turcato was the lone opposing vote.

The Taber Pro Rodeo had been the longest consecutive pro rodeo in Canada for 77 straight years up until 2017.