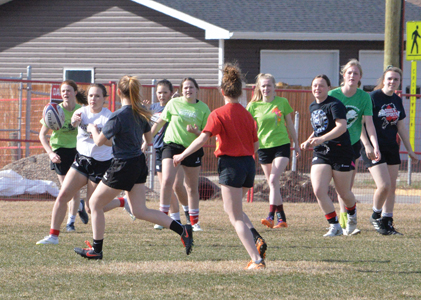 RUGBY SEASON: Alex Haller passes to a teammate at a Rebels practice at W.R. Myers last week before the first game of the season. TIMES PHOTO BY COLE PARKINSON

W.R. Myers Rebels girls rugby team got its regular season started off on the right foot with victories against Chinook Coyotes on the road last week.

The varsity Rebels earned a 24-15 victory thanks to a strong first half, with scoring tries from Alex Haller, Halle Johnson and Emily Hoyt. Hoyt also converted two of three tries.

“The first half was all Rebels with the vast majority of the play occurring inside the Coyotes’ half. The forward pack was dominating the scrums and line outs in the game,” said Rebels coach Adam Hughes. “The defence was strong, led by Vicky Shimbashi making a number of critical tackles that saved us from some major line breaks.”

The second half was a different story, where the Rebels struggled, but still managed to hang on for the victory.

“The Rebels started flat in the second half and the Coyotes gained all the momentum. Midway through the second half, the Rebels were penalized with a yellow card, giving the Coyotes a player advantage for seven minutes,” said Hughes. “The Rebels withstood this, and after a breakaway run by Andrea Harvey, Abby Wood scored the final major of the game, sealing the win for the Rebels.”

The junior varsity match proved much more lopsided, with the Rebels blanking the Coyotes 30-0.

“The JV team put on a strong overall display, shutting out the Coyotes, and running the ball in six times. It was great to see a number of girls playing for the first time shine,” said Hughes.

The Rebels will have their work cut out for them on Thursday when they host the strongest girls rugby program in the province in the Raymond Comets.