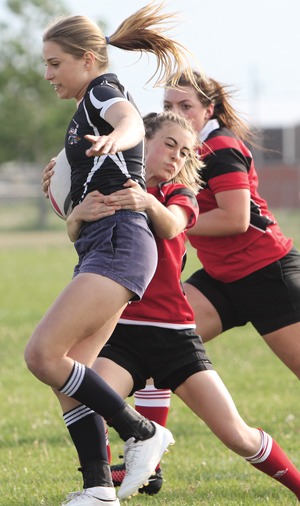 Spring is in the air and with it comes the start of another season for the W.R. Myers Rebels girls rugby program.

“We are running the JV and varsity team together (for practice) because of low numbers,” said Adam Hughes, who will be coaching alongside head coach Shayla Anderson for the varsity program. “Shayla Anderson has been involved since the beginnings of the program. I have never coached rugby before, but played quite a bit in my youth for Medicine Hat High, the Lethbridge Rugby Club and other programs.”

For the last five years the Rebels program has proven a powerhouse under the former tutelage of past head coach Chris Komery, including three straight years of Tier III provincial banners from 2016-2018.

“The main goal for this year will be to keep that going. Our team has a solid group of forwards and backs. It’s a really balanced squad,” said Hughes, adding the Myers program is being supplemented as well by players from as far away as Foremost who are playing on the team. “Veterans such as Dani Wright, Jessina Young, Andrea Harvey, Tori Turcato, Alexa Bull and Alex Haller provide great leadership on and off the pitch for the younger players.”

The team competed in a pre-season festival in Raymond on the weekend as a tune up for the regular season.

The team’s first home match is against Raymond on April 18. The team played Chinook yesterday on the road.