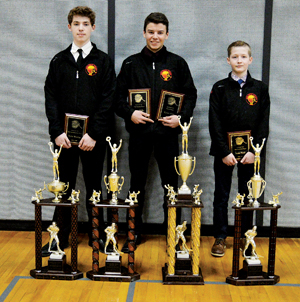 But, it had a chance to be even better if they would have gone back to the old format of multiple-game series instead of a tournament, one-and-done system they currently have now, according to the man at the helm this past year.

“I talked about it a bit at the banquet, and it’s definitely in the air. Every year it goes up for a vote, but there are towns that outnumber the other,” said Duane Nevil, head coach of the Taber midget “AA” Golden Suns this past season.
“I think they are going to really push for it this year, and it’ll be a change for the midget level I hope. You work so hard all year to get to a certain point in the standings and then it comes down to a tournament style where anyone can win. It screws up all what you did all year to fight to be number one or number two in the standings. It should just go back to the old format. The new system, you have one bad game in the next playoff round and you’re done, it doesn’t matter what you did before in round-robin.”

Taber midget “AA” Golden Suns would end up finishing in second place in the South Conference with a 21-13-5 record, after recovering from a rough start, where the team seemed to be peaking at the right time, playing their best hockey at the end.

That included the Golden Suns dominating in the round-robin portion of the year-end tournament, outscoring its three-game opposition in Lethbridge, Wheatland and Foothills 20-4. Taking first place in the pool, the Golden Suns started to take injuries in a chippy affair in the Wheatland Chiefs game that they had beat 8-1 earlier.

“In the old format, they would not have even been there. They are out to hurt as many guys as possible where in the third period, they are running around and any coach could have seen that,” said Nevil of the game they would eventually lose 3-0. “I think the kids deserve after six months of hockey more than one game, where even in the semifinal, after playing round-robin play best of three. Take it back to the hometown where you give the team that had a better season an advantage. You have a best of three or five series, that’s not too far to travel in the south.”

Nevil can see the format remaining the same for an age division like peewee where there is hardly any contact, but for midget where it is way more physical, who can persevere over the long haul, just like you see in the NHL playoffs, should be rewarded.

The 3-0 loss to Wheatland featured two shots ringing off the post and Wheatland got both of its goals on the power play, with the third an empty netter.

“If that’s a three or five-game series, I guarantee you we beat that team,” said Nevil. “The way kids are going nowadays and how they are teaching the system, where everyone gets a participation badge. There were years we were in last place in the old system and we were knocked out of contention. It gives you something to work for next season. It’s all about the process and they are wrecking the process. The regular season doesn’t mean much and it should. You have the grind of a whole season and for what?”

Nevil has coached in this format three times now, and one year in Strathmore, they won the round-robin as well where teams were tweaking the system so as not to play certain opposition.

“At that point in time, there were guys giving up games because they didn’t wan to play certain teams. How do you tell your kids that at the midget level? We have to sit back and only get two goals here because we want to play this team,” said Nevil. “The whole purpose is you want to win the game and I’m telling my kids we want to win it all. Not try to alter games on purpose.”